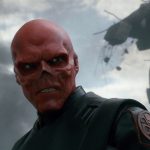 While Hugo Weaving perfectly portrayed the villainous Red Skull in Captain America: The First Avenger, he didn’t reprise his role when the character reappeared as a guide to the Soul Stone in Avengers: Infinity War and Avengers: Endgame. Now, in an interview with TimeOut, Weaving explained why he was initially open to returning to the role […] 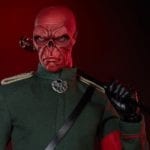 Sideshow has unveiled its 1:6 scale Red Skull figure, which comes complete with several interchangeable pieces and accessories and is available to pre-order now, priced at $235.00; check out the promotional images of the Marvel villain below… SUPPORT FLICKERING MYTH: Order via Sideshow Collectibles The ruthless Red Skull Sixth Scale Figure includes a green bodysuit with […] Hasbro has unveiled its San Diego Comic-Con exclusive Marvel Legends Series Red Skull & Electronic Tesseract from the Marvel Studios: The First Ten Years collection. Inspired by the villain’s appearance in the superhero blockbuster Captain America: The First Avenger, the pack is available to buy exclusively at SDCC later this month and at Fan Expo […]

Writer Josh Williamson (Birthright, Nailbiter) and artist Luca Pizzari (Amazing Spider-Man Special) are set to deliver a twisted tale from the bowels of Battleworld this July as Red Skull returns to the Marvel Universe for Secret Wars. “I’ll be honest, this book is super dark,” states writer Josh Williamson. “It matches what you’d expect a […]

Warning – probably not worth reading this if you’re eating your lunch! Captain America superfan Henry Damon has gone through several implant procedures, tattooed his eyeballs and his skin to look like Steve Roger’s iconic villain Red Skull. And now he’s gone one step further – by cutting off part of his nose to complete the […]