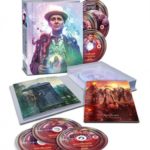 Back in the late 1980’s The Doctor (Sylvester McCoy) and Ace (Sophie Aldred) sped across Time and Space facing off against some of the Doctor’s greatest foes.  From the Daleks to the Cybermen in the early episodes and here – with this release – dragging the viewers into sheer horror with The Curse of Fenric […]

Last weekend it was announced that Jodie Whittaker has been cast as the Thirteenth Doctor in the long-running British sci-fi series Doctor Who, becoming the first female actor to take on the role of the iconic Time Lord. Yesterday at the San Diego Comic-Con International, Flickering Myth’s Tai Freligh caught up with Colin Baker (The […]