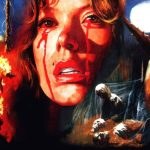 Tom Jolliffe goes back to the 80s to look at a crazy, gore-filled period in Italian horror cinema… There’s a great legacy in Italian Horror. Most famously, the giallo films which rose to prominence through the 60’s and 70’s (led first by Mario Bava, and taken to new heights via Dario Argento), put Italian horror […] Marvelous Videos presents Italian horror movies for the ages… It seems that many countries contribute to the proliferation of the horror genre. Korean and Japanese horror focuses on spirits and ghosts, American horror is more about tangible threats, and German expressionism lays the baseline for everything scary. And then there’s Italian horror. Also known as […] The Beyond, 1981. Directed by Lucio Fulci. Starring Catriona McCall, David Warbeck, Ciniza Monreale and Antoine St John. SYNOPSIS: In New Orleans in the 1920s, an artist is gruesomely killed by an angry mob who believe he is a warlock. Several decades later, a young woman named Liza acquires the hotel where the artist was killed […]