The new story arc ‘Nuke-Clear War’ gets underway in Weapon X #12 this coming Wednesday, and you can take a look at a preview of the issue here courtesy of Marvel Comics… Nuke-Clear War Part 1! Mutant genocide is being committed in a small, third-world country. Now it’s up to Weapon X to stop this massacre! […] 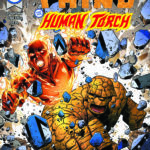 Sideshow has unveiled a batch of promotional images for Iron Studios upcoming Weapon X Legacy Replica statue. The Marvel collectible is available to pre-order now, priced at $599.99, and is expected to ship between January and March 2018; check it out below… SEE ALSO: Pre-order via Sideshow Collectibles   Sideshow and Iron Studios are proud to […]

Warning: the following article features spoilers for X-Men: Apocalypse… Over the past few months, many fans have been lead to believe that Hugh Jackman’s third and final Wolverine solo film would be an adaptation of one of the most popular comic book storylines involving the character, Mark Millar’s Old Man Logan. However, if the post-credits scene for […]