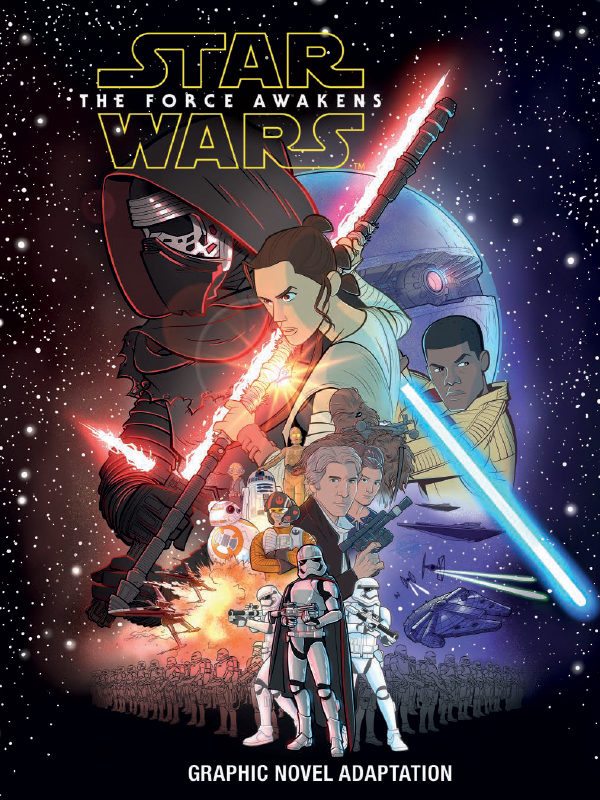 Reading this book takes me directly back to the 90’s and reading the “Junior Novelization” of Jurassic Park; a trumped up picture book with small excerpts from the movie. When someone gave that to me, that hadn’t a clue I’d already finished the actual novel. No matter. There was something fun about holding the movie in my hands instead of having to pop the VHS in and wait two hours for the whole story to unfold when I could just turn to any scene (most of it words) in my picture book representation.

If I had a graphic novel adaptation, who knows if my child mind would even need the film! IDW’s adaptation of The Force Awakens is just like those old junior books I had; it completely and faithfully depicts the film as closely as you possibly could. There is nothing added; some dialogue, small scenes omitted but it captures 90% of the two-hour film that took audiences by storm two years back when J.J. Abrams brought Star Wars back to the big screen.

For a young adult, this is an awesome piece of art. The style, while cartoonish, captures some of the most unique features of each and every character featured in the book, but not in a carnival caricature artist way, in a more stylized way. In some ways, like during Finn and Rey’s conversation in the Falcon, the close ups do this book more service and can emote a lot in those panels. In others, the emotional weight the film itself captures in some moments can’t hoped to be matched here, as when Luke places his robotic hand on R2, or Rey calls Luke’s lightsaber or the amazing shot in the opening moments when Kylo Ren stops Poe’s rifle blast bolt in mid-air, but they give it their best shot. Minor nitpicks with the art are better left in another article and calling out the dialogue would almost be a film review as none of it here is original. The intended audience will enjoy having this and I think even smaller children will relish this book because it requires no attention span to make it through the film. They can do what kids have done for years, what I recall fondly in the 90’s, skip to their favorite parts and relive them over and over again, in the palms of their hands.