Inspired by popular programmes like Buffy the Vampire Slayer, Angel and Being Human, Cops and Monsters is an innovative spin on the hallmarks of a much-loved genre, updating them for a new era – and setting it all in Scotland. Starring – amongst others – Simon Weir and Kenny Boyle, the series was an entirely independent venture, crowdfunded via Kickstarter – the show found a home on YouTube, was met with much critical acclaim, and has now been picked up by Amazon. The supernatural police thriller is now exclusively available on Amazon Prime, which will be the home of any potential future instalments…

So, could you tell us a little bit about how you first got involved with Cops and Monsters? What attracted you to the series?

Simon: I have worked with Fraser (Fraser Coull, series showrunner) on lots of film projects previously and it was the opportunity to finally play a cop! I am usually cast as a villain, so this was a nice change for me, although at times I think I bring a certain villainous quality to Norris! I liked the premise of the show, being a Taggart veteran and thought it a great project and very ‘now’ in the supernatural element. Fraser works quickly, and we get lots of scenes done quickly, which makes the shoot days enjoyable and productive.

Kenny: I’ve played small parts in – I think literally – every series that Fraser has made, and Fraser felt it was about time he put me in a more central role! For me, the opportunity to be connected to grassroots film making where people go out and get things done is always exciting. I think it’s a concept worth supporting.

For our readers who are unfamiliar with the series, could you tell us a little bit about your character? What makes them stand out amongst the ensemble?

Kenny: My character – Martin – is quiet and reserved and (refreshingly) plays second fiddle to Ellen’s character Mya. He’s the complicated love interest and after he gets captured he becomes the Princess Peach to Mya’s Mario. Fortunately, he’s a little more interesting than Peach. Brooding, sulky and also quietly confident Martin gives the impression that there’s a darkness inside him that he may actually relish should it escape.

Simon: I play Chief of the PITS Squad, Norris Fletcher. A hoary old copper who has been assigned to this squad against his will and quickly has to assemble an undercover team to battle the dark forces abroad in Scotland, whilst protecting the community. Under the close watch of the Press and the snooping Minister of Justice Clark, who wants the squad disbanded he fights hard for his team despite setback after setback and gets to be a part of the action as well as he hates being deskbound. The Christmas Special last year was his own spin-off episode and showed a different, softer side to Norris. He’s a typical Glasgow Polis, no-nonsense, volcanic temper and hard as nails and great fun to play! 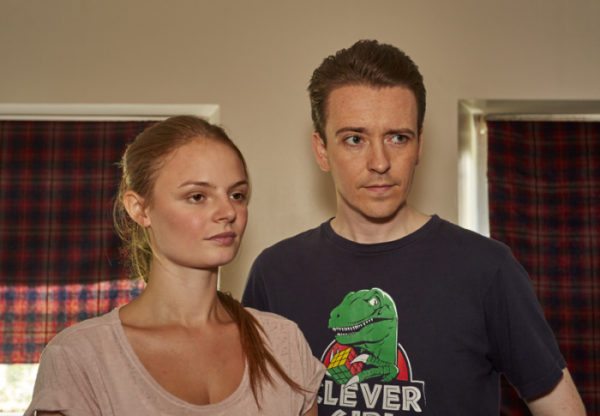 You’ve been involved with the project since the beginning – how do you think the series has evolved?

Simon: The show has gone from strength to strength as the writing improves, the characters become more fleshed-out and the back stories of all of them come to the fore. The production values and editing have really improved as well, and the final episode is our best so far in my opinion. Every new show has to find its feet and ours has done so in this first series and can only get better. More guest stars from the likes of Doctor Who and Wolfblood have increased the interest and the performance level, and we have more clamouring to become a part of it, so the status of the show will increase as will the interest. Writers such as Roland Moore have been pivotal to this as well.

Kenny: I actually haven’t! Though close enough I suppose. I wasn’t involved in the pilot. But seeing how the tone of the show has shifted from bubble-gum and light-hearted in the pilot to really quite sinister and dark by the end of the series is really exciting and interesting!

The series is moving to Amazon now – how do you feel about that? What sort of opportunities do you think Prime and similar platforms offer the world of indie film?

Kenny: I think it’s a grand opportunity for Fraser to bring his project to a far wider audience. Amazon lends a certain legitimacy that simply having the series on YouTube or Vimeo certainly doesn’t convey!

Simon: What a great platform that is! It throws a huge lifeline to indie projects such as ours as the web-series has its limits on the likes of YouTube etc and needs an injection from a platform broadcaster who package the show and have a targeted audience already waiting. It opens up a whole new world of viewers for us and I am thrilled to be a part of it. The likes of Amazon and Netflix have completely changed our industry for the better, allowing self-funded indie content to fight for a place amongst the Big Boys and regardless of budget, it comes down to simply telling good stories to a mass audience.

Finally, what’s the main thing you’d like audiences to take away from watching Cops and Monsters?

Simon: A second series! As long as they get behind the show, enjoy the storylines and characters, it will engage people. If they can get past the slightly rough and ready early episodes this does reward the viewer as the series progresses and there are many directions this show can go in future series. And we are all very committed to making it work and displaying another unseen side of Scotland, with authentic voices and locations and given time and a budget, this show could really fly. Most of all, I just want people to enjoy it and my work in Cops and Monsters.

Kenny: I think the best thing about the series is the presence of so many strong female characters. By strong I don’t mean physically strong or even mentally strong I mean strongly written. The ladies in this show are so multi-faceted and interesting and that’s how it OUGHT to be. So obviously audiences should take away that vampires are cool and that the Cult is creepy… but really the most important thing to take away is that actresses are just as capable of playing the cool, or damaged, or dangerously loose cannon characters as their male counterparts and people ought to be making more things where that’s the case.