After striking up a friendship with wrestler Cody Rhodes following his guest appearance in Arrow as Derek Sampson, actor Stephen Amell made his pro-wrestling debut in 2015, appearing in a tag match alongside Neville as they faced Rhodes’ Stardust and King Barrett at SummerSlam.

Amell returned to the squared circle last month at a Ring of Honor event, where he became a member of the Bullet Club faction and teamed with Rhodes, Kenny Omega and the Young Bucks to face The Addiction, Flip Gordon and Scorpio Sky. And now it seems he’s hoping to entice his Bullet Club buddies into a guest appearance on The CW’s superhero show.

“I’m trying to get those guys to come out to one of these shows, as a group,” said Amell at the Heroes & Villains Fan Fest. “I think that would be amazing. Those guys are great. Matt and Nick and Kenny and Cody being the main guys I’ve been able to hang out with. I appreciate anyone that does something in an entrepreneurial spirit. Those guys are really paving their own way. I mean, we would decimate them in one episode. They would be the group that we would foil in act one, and then figure out what the real problem was. If Sampson was to come back on the show, it would only make sense that he would be surrounded by his group of Bullet Club friends.”

While we await word on the Bullet Club joining the Arrowverse, we do have one other pro-wrestler set to make his debut, with Bill Goldberg lined up for a two-episode guest role on The Flash. 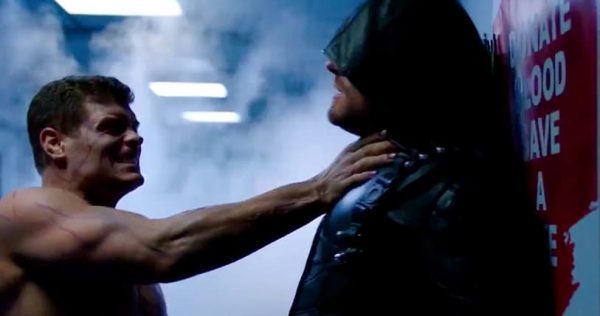