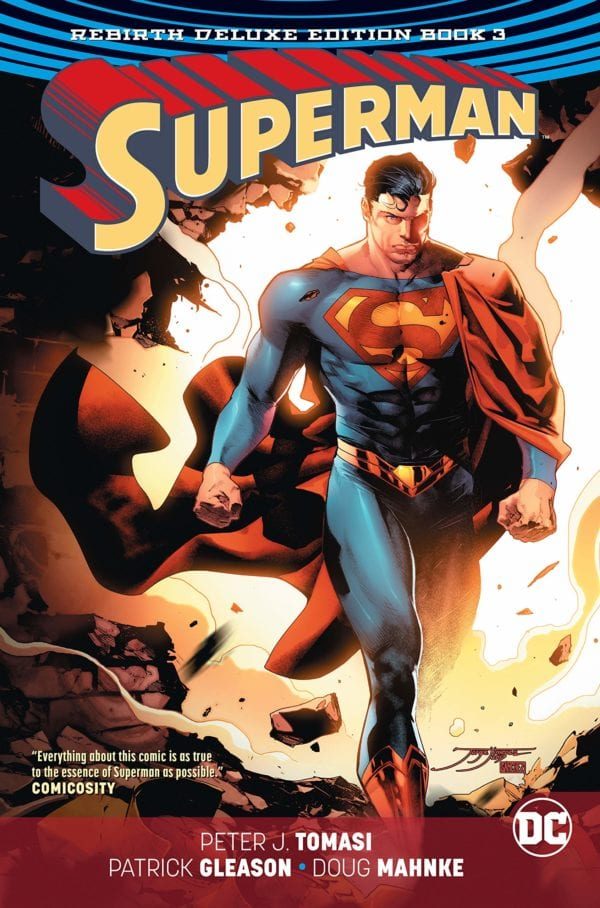 When it comes to superheroes known for being a hopeful figure, Superman stands at the top of that list for the inspiration he offers both to his fellow superheroes and real-life fans. Peter Tomasi and Patrick Gleason strike to the core of Superman’s status in Superman: Rebirth Deluxe Edition Book 3 in a series of stories that focus on his central characteristic of hope. While most of the book features a fair bit of action, they never lose sight of its examination on why Superman is such an inspirational figure with some great art to boot.

The two stories that stand out the most in regards to Superman’s hope are the first two, ‘Declaration’ and ‘Independence Day’, which sees the Kent family go on a road trip over the Independence Day weekend to reflect on the sacrifices their countrymen and veterans have made. There’s no action to be had anywhere as it just focuses on Clark Kent as a human being espousing the virtues he stands for, whether its removing graffiti on a war memorial or treating a homeless veteran to dinner. Clark doesn’t steal the entire show, however, as Lois also imparts on Jon the importance of the weekend by telling him of a forgotten war hero along with the story of her deceased uncle. Tomasi and Gleason’s tight script displays a clear affection for history as well as Superman’s belief and faith in doing the right thing. The story’s final moments of Superman returning the bones of a missing veteran are particularly moving and totally in character for the Man of Steel.

After that story, Superman takes on some enemies outside his rogues gallery, but no less dangerous in the wider DC universe: Sinestro, Parallax and Deathstroke. His battle with Parallax and Sinestro, which is written by guest writer Keith Champagne, highlights how little Superman gives into fear even to an entity like Parallax. Superman’s got some interesting chemistry with Sinestro as they are two figures on such polar opposite ends of the emotional spectrum. It’s not often that Sinestro is at a loss for words, but there’s a pretty satisfying moment where Superman shows him how out of his depth he is dealing with him. The issues with Deathstroke, written by other guest writer James Bonny, has some good interactions between the Terminator and both Superman and Lois. Lois tracks him down for an exclusive interview which puts a target on her back that results in some fights between Superman and Deathstroke which are pretty entertaining. Bonny utilizes Deathstroke’s heightened intelligence and deadly skill well enough to make him a credible threat for Superman. One of the interesting aspects from Deathstroke’s story is how it shifts to his perspective on Superman as he fights him, commenting on the hero’s emotions and (from his perspective anyway) naivety. Seeing Superman take on villains outside his normal wheelhouse is one of the book’s most appealing aspects.

The final story is ‘Imperius Lex’ and focuses on the Kent family getting trapped on Apokolips after Lex Luthor’s abduction. Picking up from events in The Darkseid War where Lex became the ruler of Apokolips, ‘Imperius Lex’ is a fairly wild story that mixes Superman and Mad Max together with stuff like Jon taming a horde of wild mutant dogs or Lois becoming one of Granny Goodness’ Furies. Even with crazy imagery like that, it still doesn’t lose focus on Superman’s impact on Apokolips as well as his tumultuous relationship with Lex. As much as Lex has tried to change his ways in the pages of Superman and Action Comics, old habits tend to die hard with him, though he at least tries to come clean with the people of Apokolips and Superman. Tomasi and Gleason offer a nice dichotomy between Superman and Lex as their relationship finally fractures once again, laying the groundwork for Lex’s decisions in No Justice and Justice League Vol. 1: The Totality.

The art throughout the book features the work of several artists such as Doug Mahnke, Scott Godlewski, Tyler Kirkham, Philip Tan, Ed Benes and others. Each artist is very detailed in their work as they make the action clear and easy-to-follow and emphasize the character’s emotions and body language in several instances. The art is made better by colourists Gabe Eltaeb, Tomue Morey, Wil Quintana and others who give it a very vibrant look, particularly the opening Independence Day story and ‘Imperius Rex’. The Deluxe format of the book serves to enhance the art by letting readers pour over it even more.

Superman: Rebirth Deluxe Edition Book 3 has some very entertaining stories for fans of the Man of Steel that focus on his ability to hope and give hope to others. Tomasi and Gleason do very well conveying this characteristic of Superman’s as well as his relationship with Lois, Jon and others. Between the examination of Superman’s hope and the appeal of him with other villains, this latest Rebirth Deluxe Edition succeeds on many fronts.