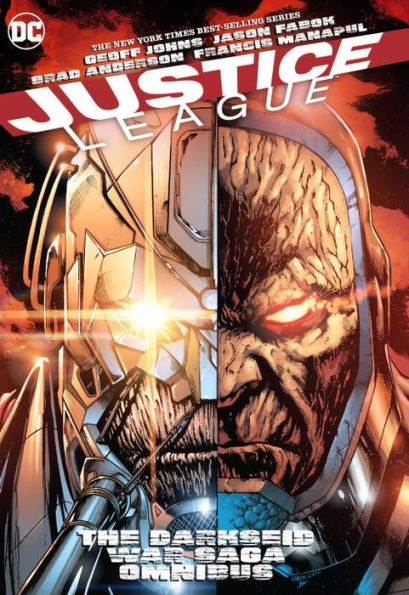 When DC’s New 52 was coming to an end, Geoff Johns ended his Justice League run in an epic fashion. Being one of the very few writers who stayed on a title from beginning to end, Johns brought it back to the beginning when Darkseid returns to Earth after his long-lost daughter Grail resurfaces, complete with the Anti-Monitor in tow. Tying all the loose ends from his run together, Lex Luthor joining the Justice League, the Crime Syndicate from Forever Evil and the threat of the Anti-Monitor, The Darkseid War was an entertaining series that had some unexpected twists and turns with fantastic art. Previously split into two volumes and one companion book, DC has now collected the whole thing in Justice League: The Darkseid War Saga Omnibus.

This is a small but hefty book, collecting Justice League #40 – 50, The Darkseid War Special, a part of the Free Comic Book Day Divergence issue and all the Darkseid War one-shot tie-in issues. It’s a pretty nice collection, especially since its all placed in one book as opposed to the previously released three separate volumes. It really allows the scope of the story to be felt all throughout the book as the Justice League fight multiple battles on the same front, from Darkseid and the Anti-Monitor’s forces to that of Grail and her mother. It also helps that the book places the issues in chronological order – not that the Justice League issues jump around in time, but the tie-ins featuring some of the League members going off for while are placed in the reading order they should be. However, this also creates a bit of confusion within the story itself, which I’ll get to shortly. Johns does a pretty good job balancing the large ensemble cast, though some heroes get pushed to the side a bit more than others. Captain Cold, for instance, is nowhere to be found after the first issue for no given reason and despite being part of the premonition in the opening chapter, Aquaman isn’t even part of this story (though a few of the events in the premonition don’t even happen either). However, those who are focused on get some great moments. Batman becoming the God of Knowledge is an entertaining aspect of the book, examining some of the character’s stubborn nature as he now knows all the answers of the universe. Lex Luthor also has some great moments as he continues his position in the Justice League and is forced to work with Superman while trapped on Apokolips.

The real character who shines throughout Darkseid War, though, is Wonder Woman. During Johns’ time on Justice League, Wonder Woman was often pushed to the side, never really getting enough focus or even narration of her own. In this story, she’s pretty much the lead character as she is the book’s sole narrator in the main issues and is the central figure that rallies the Justice League and other characters. Her examination of war, namely starting one to preemptively end one, is one of the strongest themes of Darkseid War. She is also placed in an interesting spot to reflect on how she and the League are often seen as gods, giving her some nice insight into this war among various gods. 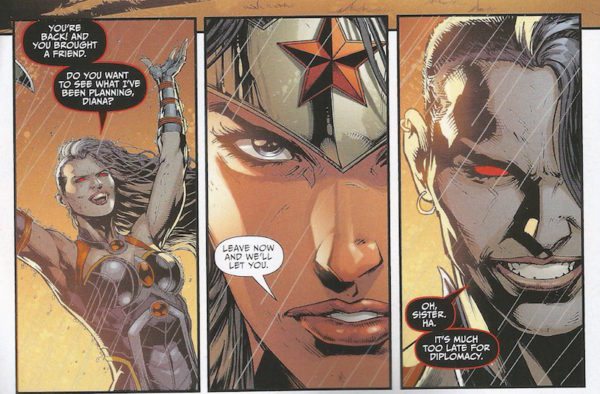 Darkseid surprisingly doesn’t appear in this as much as the title suggests. Even the Anti-Monitor’s role is rather minimal, though both villains do hold a couple big surprises in the story. Grail is really presented as the main villain and Johns does well with her, painting her as a dark mirror of Diana that is evil to her core despite everything her mother did to prevent that. She’s an interesting character, though her backstory and true motivations, which are a bit predictable, may be revealed a little too late to the end.

The story flows pretty well for the most part, though there are a couple aspects that stand out a bit negatively. Once the first act of the war closes, the book launches into the one-shot tie-ins featuring the individual members of the Justice League and how they handle some newfound powers. It sort of breaks the flow of the main story, especially as some tie-ins state they take place over a few days while the main story seems happen in the course of one or two nights at most. Some of the tie-ins are interesting in how the heroes have changed with their new powers, but most don’t really reveal anything new about the characters or add anything impactful to the story.

Outside of those tie-ins, though, the main story is well told. Its action packed and Johns finds time to develop the characters, particularly Wonder Woman, well. One little issue though is Johns’ use of recapping events at the beginning of each chapter, something done mostly for those who read the issues on a month-to-month basis, but gets a bit repetitive when read all the way through. Aside from that, it’s still a good story that Johns uses to examine the characters as they go up against some of the biggest threats they’ve ever come across, tying up some loose ends from The New 52 while laying a bit of groundwork for DC Rebirth. 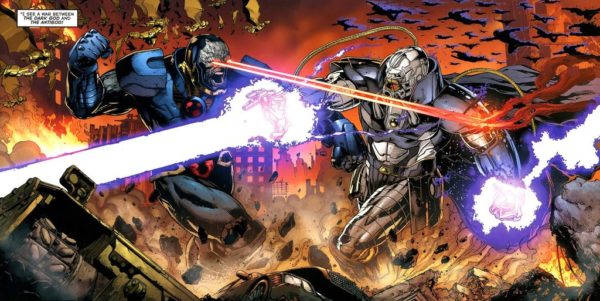 The art is one of the big selling points of the book. Jason Fabok is the main artist on The Darkseid War and creates some excellent imagery. With all the characters he has to bounce between on the page, the visuals come across quite clear with no confusion as to what is happening. There’s some very nice character movement in the images from Fabok, making the art flow nicely between panels and plenty of beautiful splash pages. His art alone is well worth it. The other artists do well too, with Jesus Merino and Fernando Pasarin’s work on The Flash and Batman tie-ins standing out. Francis Manapulalso fills in for a couple issues of the main story and does well with both the quiet and action imagery, though it also causes the book to look a bit inconsistent since it suddenly switches from Fabok to Manapul and the two have very different styles. However, Manapul’s issues also helps lead into the various styles and looks of the tie-ins so the change isn’t all that bad.

Justice League: The Darkseid War Saga Omnibus is a fun and entertaining story from Johns, Fabok and others that has some good characterization of the Justice League, Wonder Woman in particular, with great artwork and an examination of what makes these heroes separate from gods. The collection isn’t without some problems, as the flow of the story is hampered a bit, but it’s very nice to have it all in one place and really shows the full scope of two DC powerhouses going head-to-head on Earth. The book could have collected a bit more sketches and designs from Fabok, maybe even a script or story insight from Johns, but is definitely worth getting if you’re a fan of Justice League, Darkseid and Johns.