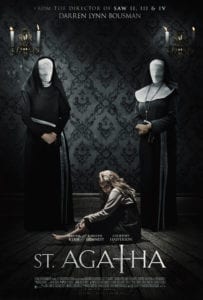 Set in the 1950s in small-town Georgia, a pregnant young woman named Agatha seeks refuge in a convent. What first starts out as the perfect place to have a child turns into a dark layer where silence is forced, ghastly secrets are masked, and every bit of will power Agatha has is tested as she learns the sick and twisted truth of the convent and the odd people that lurk inside its halls. 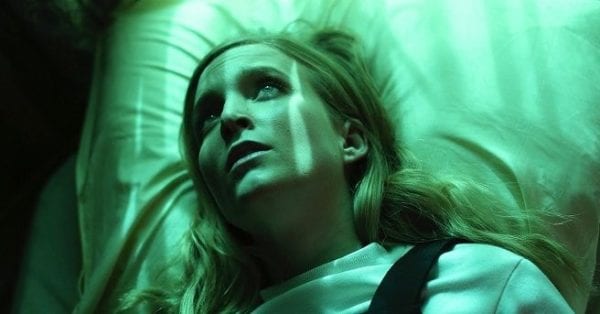 Religion, despite holy and wholesome convictions, is a damn-near perfect vessel for horror. Exorcisms, demonic possessions, Nunsploitation – Darren Lynn Bousman’s St. Agatha is the latest in a long line of convent demoralization. Subversion under a black hood and white veil. His story plays a crook’s arc on “Magdalene Laundries” where the cloth failed pregnant women, but lacks the scares of past secular horror tales such as Bousman’s 11-11-11. Sisters of faith played like predatory camouflaged wolves as a reminder that congregations can easily be fooled – if only a little more were asked of this diabolical Sunday sacrilege.

Mary (Sabrina Kern) – celebrated name intended – flees to the local Sisters of Divinity cloister when she’s blessed with child. Her abusive father cannot be trusted, and trumpeter baby daddy Jimmy (Justin Miles) stares down nights on the road, so Mary has nowhere to turn. Mother Superior (Carolyn Hennesy) opens her doors to Mary, but odd practices quickly warn things may not be as they seem. Pregnant women are sworn to silence, trapped behind barred windows, and soon Mary realizes there’s more to Mother Superior’s overseeing than The Bible’s divine teachings.

My praise starts with Mark Sayfritz’s score, which ekes and squeals while echoing choice incantations as tempers flare. Towards the end, when Mary – or “Agatha” as Mother Superior renames because “Mary’s pure namesake does not fit the heathen – attempts to escape Sisters of Divinity. Atop enraged scoring, you can hear “Agatha” being chant-whispered to eerily unsettling results. Sonic moodiness to pair with Joseph White’s cinematography – hellish red tints in the basement, more grounded aesthetics above ground to match nunnery garb – in a way that sets an at-times diabolical tone.

Themes throughout St. Agatha are easy to follow, given how characters use terms like “gaslighting” on their own volition. Women are hoodwinked – bamboozled – by Mother Superior’s plot that involves donors, newborn babies, and an ongoing con under God’s nose. Mary finds herself locked in a coffin, contained by Mother Superior’s flock (most notably right-hand Paula played by Trin Miller), unable to leave until she accepts her newfound life as “Agatha.” Forced to break her lover Jimmy’s heart, tricked into signing away legal rights, and presented as a crazy person through situational manipulation. It’s maddening, and that’s what Bousman intends. Hopelessness and desperation in heavy doses.

On the flip, Bousman’s handle on horror doesn’t equate to many jumps. Claustrophobic jitters and gross-outs? Coffins will do that to you and don’t dare plan dinner-and-a-movie with St. Agatha. Not because of gore, but food-related disgust [shudders]. Mother Superior isn’t a devil in the underworld sense, so expect no ghoulish figures or upturned crosses due to malevolent presences. White’s framing of angelic statues welcoming guests into Sisters Of Divinity may shine, but the repetitive nature of Mary’s escape attempts does become a bit cyclical. Mary sprints, thinks salvation may be in reach, only to fail by Mother Superior’s interjection at the last moment with a shovel or bear trap or a sharpshooter nun staring down a shotgun.

I’ll admit, the nuns with guns vibe entirely works for me as a throwback exploitation additive.

Credit Sabrina Kern with nailing the urgency behind Mary’s imprisonment, troubled by her character’s quest for survival and the shared punishments those around her endure. Early backstory material – Mary’s swindler’s scheming with Jimmy and brother’s tragic demise – aren’t as realized or punchy, maybe because Carolyn Hennesy’s Mother Superior is such a savage scene-grabbing bastard. A puppeteer who wills people into despicable biddings – cut out their own tongues and whatnot – which Hennesy sells with unshaken resolve, emotionless business acumen, and outright evil intent. Supporting players fall into place, but Kern and Hennesy shine outright.

In the end, St. Agatha diverts from Catholicism nightmares of old by damning the innocent, ignoring preconceptions, and delivering a convent tale that bucks the system. Never overwhelmingly terrifying, but artfully shot and prone to panic. Did I mention there’s a nasty umbilical cord sequence? Darren Lynn Bousman highlights parental fears, faceless sisters, and bodily harm in this serviceable tense tossup to criminal blasphemy, worth the not-even-90-minutes (minus credits) running time posted. Another strong indie horror offering from a filmmaker who continues to carve his own path outside mainstream systems.