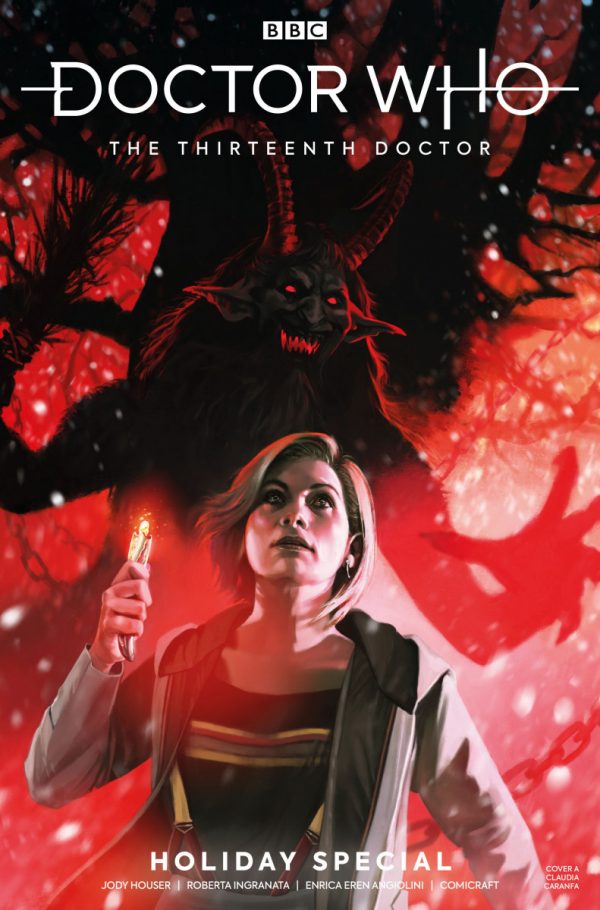 With the lack of a Doctor Who Christmas Day Special, it’s been down to the good people over at Titan Comics to deliver us our slice of festive Time Lord cheer.  Thankfully they chose a team including Jody Houser and Roberta Ingranata to deliver us the Christmas Doctor Who joy, as the opening issue of this two-part special was just fantastic!  Now a week before the big day arrives, the closing issue has been placed in our hands and it feels like Christmas has come early.

With the Doctor, Graham, Yaz and Ryan locked in Mr. Henderson’s cell all seems lost.  No closer to discovering why their memories were replaced, why Santa’s name is mud in these parts and why Mr. Henderson is snatching Aliens for his workshop – though this could change due to the appearance of an Elf named Baxter, sent by their forgotten friend named Jeff (the Security Officer).

This is quite frankly a perfect Doctor Who Christmas Special.  Honestly, Chris Chibnall needs to give Jody Houser a call and ask if the BBC can run with this next year on Christmas Day.  Everything over these past couple of issues, from the lost memory mystery to the final Christmas inspired “Big Bad”, made these two reads just brilliant.  Jody Houser has truly delivered a Doctor Who Christmas Special that is worth remembering.

It also has to be said the beautiful artwork from Roberta Ingranata, who has managed to make this comic book look visually both Christmas-y and a treat to read, played a big part in making this comic book extra special.  Along with this capturing the spirit of the Doctor and her Companions, which I’ve mentioned before, I could honestly hear the voices of Graham and Co. thanks to Roberta’s work on these pages.  I’ve now mentally made a note of the name “Roberta Ingranata”, for I’ll be looking out for future comics containing her work.

This, thanks to all at Titan Comics, is the Doctor Who Christmas Special we’ve deserved for the past couple of years.  You cannot let these two comic books pass you by – they’re both fantastic and are needed in any Doctor Who fan’s collection.