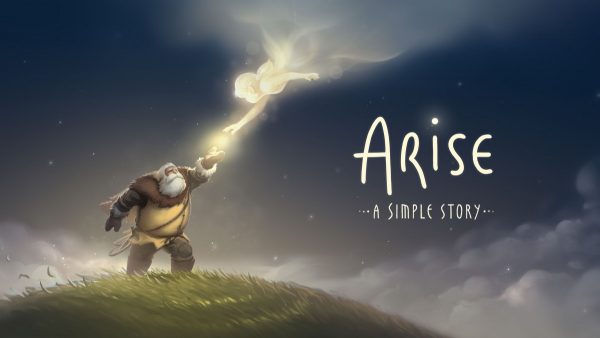 The debut title from developer Piccolo Studio might seem like yet another predictably minimalist indie puzzle-platformer, yet there’s an emotional honesty and resonance to Arise: A Simple Story which ensures the game’s brief-but-bracing journey is anything but familiar.

And indeed, Arise‘s narrative is as straight-forward as its title implies; players are cast in the role of a lone, old tribesman as he looks back upon his life, re-examining his most potent memories as succinctly allegorised by the environments he’s tasked with traversing.

But the game’s real hook is its central time-shifting gameplay mechanic, whereby with a tap of the right analog stick, you can rewind or fast-forward the flow of time in order to manipulate your surroundings and continue onward.

Temporal tinkering is hardly a ground-breaking trick in a video game these days, but there’s a charming, deceptive cleverness to its otherwise simple utility here. You’re not changing time to pull off an awesome action feat, but simply to exploit the elements – such as re-freezing a melted patch of ice – in order to reach the next area. Initially, you’re “only” able to move time backwards and forwards, but before long you’re also gifted the ability to freeze time completely.

This ingenious flourish truly allows the game to come into its own; leaping between crumbling, falling rock platforms as you hold them in the air is a thrilling feat of quasi-superheroic wish fulfilment. You’ll also need to use your grappling hook at times to reach new platforms and create new pathways, and employing these various abilities in tandem feels impressively intuitive, especially given how easily combining them could’ve turned awkward. 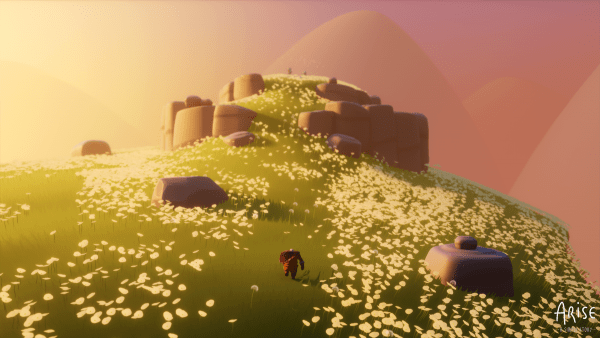 While Arise‘s mere four-hour play time – or five if you really stop to smell the roses – is surely enough to keep ennui from ever setting in, the game’s eye-popping environmental diversity sure doesn’t hurt either.

Across its 10 levels, themed for distinct feelings and emotions, there’s a considerable amount of variety, from a Honey, I Shrunk the Kids-esque early level where you hop among giant sunflowers, to a snow-topped tundra where you’re battling against freezing to death, and even a few sections where you’re pursued by spectral creatures which want to give you the hug of death.

Mercifully, though, the game resists the urge to introduce any palpable combat elements, and making your way past these enemies, either by freezing time when lightning strikes or harnessing a fire storm later on, isn’t stressful at all.

The highlight set-piece, however, is a mid-game level called “Romance,” a visually stunning trip down a river where the player is tasked with leaping between flower petals as they head downriver. It’s among the most ethereal gaming moments I’ve enjoyed all year, and a credit to what’s possible when artful ideas prevail no matter the size of the budget. It’s a simple but gorgeous sequence, and on its own a mini-masterpiece of design, style, and execution. 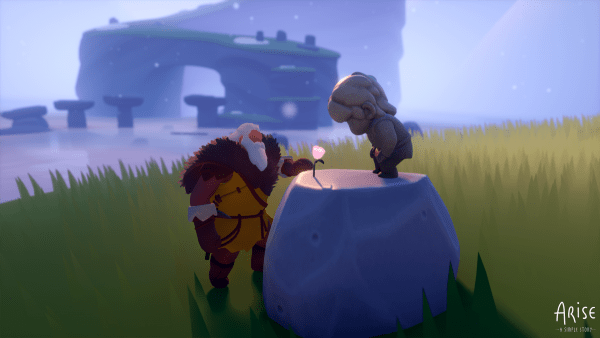 Moreover, I was left slack-jawed for the majority of my time playing Arise, simply stunned that this game had arrived, near enough out of nowhere, and struck such a chord with me. Its beauty, both aesthetically and thematically, is almost enough to earn it a slot on the all-timer list, but the game sadly has one nagging, debilitating issue; its controls.

Character traversal is dissatisfyingly far from precise at times, which combined with the fixed camera angles, can make it tough to figure out the expected axis of movement. While this isn’t a problem in the earlier tutorial-esque sections of the game, it comes close to maddening in levels that require a strict exactitude, such as when leaping onto logs, the perceptive depth of which isn’t always clear.

Furthermore, there are two levels in the game’s second half, one involving bouncy platforms and the other sheets of ice, which left me deeply irritated at just how slack and at times unresponsive the game was to my inputs. This is unaided by some occasionally janky character animation, and several instances where our hero straight-up clipped through the environment mid-jump. Some of these issues are reportedly going to be tightened up for release, but as ever, wait and see on that.

Thankfully this frustration factor is mitigated by the game’s sensibly snappy respawn system; you’re never asked to trawl back through a tedious section again, as you’ll literally re-emerge on the nearest safe platform after dying. Given that Piccolo could’ve easily padded the adventure out for another hour or two with a stricter checkpoint system, they deserve praise for keeping it so concise.

If Arise tells most of its story through its environment, it’s fitting that the game is an absolute beauty to behold, with its uncommonly imaginative level design accentuated by the heightened, fantastical style. 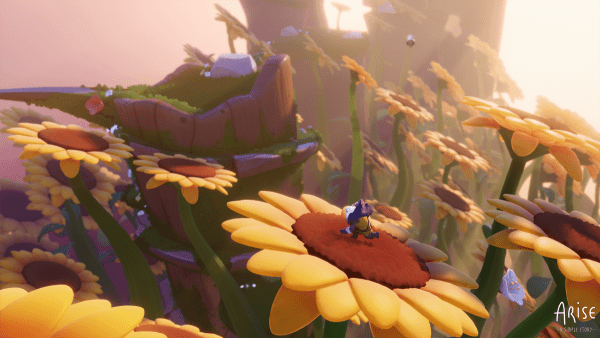 What really helps sell even the game’s oft-simple texture work is the eye-wateringly beautiful lighting, creating a mood governed by both joyous rays of brilliant light and, in its darker moments, eerie use of shadows. Played in 4K, this is simply one of the most visually breathtaking games I’ve played all year, as is all the more impressive given the evidently lower-budget production.

Aurally, the game is presented with no dialogue whatsoever, telling its tale wordlessly through elemental imagery while abetted at all times by the soul-wrenching orchestral swell of David García’s (Hellblade: Senua’s Sacrifice, RiME) spectacularly moving musical score. These aspects conspire to give the story a devastating slow-creep, and by game’s end, without saying a single word, I was left misty-eyed at its universal, exceptionally well-realised story. To say it packs an emotional wallop is an understatement.

If all this isn’t enough to sell Arise, the game also offers up alternate routes worth exploring, which have been crafted with just as much intelligence and ingenuity as the critical path. In these detours you’ll stumble across collectibles; painterly “memories” which lend further subtle context to the story.

But the real added value comes by way of an alluring co-op offering; a second player is able to dive in and control the flow of time while the first player focuses on maneuvering the old man. While hardly a game that begged a co-op inclusion, divvying-up the two primary gameplay systems this way is at least an inspired use of multiplayer.

While falling agonisingly short of true brilliance, Arise: A Simple Story is nevertheless one of the most strikingly affecting and downright memorable video game experiences I’ve had all year. A beautiful, creative indie platformer that’s held back from classic status by its infuriatingly imprecise controls. The sumptuous journey is still very much worth it, though. 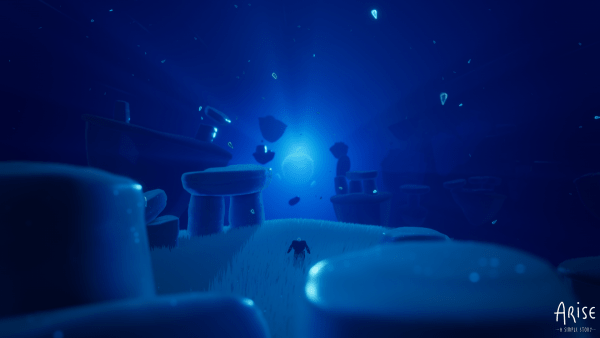 Reviewed on PC (also available for PS4 and Xbox One).