Taking a break from the gloom and doom of Picard’s life in the recent episodes that have been discussed, ‘The Inner Light’ doesn’t offer any deep changes to the Star Trek franchise or to Picard’s life, yet it still has a profound impact on him through his experience in this episode. In fact, ‘The Inner Light’ has been so often named a favourite episode of The Next Generation over the years, but Patrick Stewart himself has named it his favourite Picard story out of the entire series. With great performances from Stewart and the cast as well as great, emotional writing, it’s not hard to see why it’s considered one of the best Picard episodes. 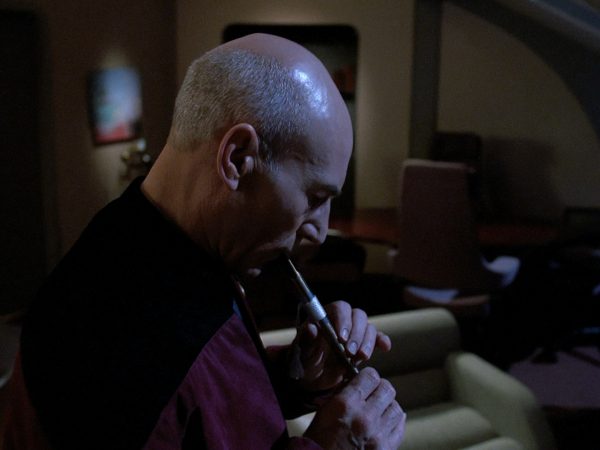 The Enterprise comes into contact with an alien probe which puts Picard into a coma almost immediately. As the crew attempt to wake Picard and disconnect him from the probe, the captain wakes up in an almost primitive village called Ressik as Kamin, a popular member of the town’s community who has several friends and a wife. Years seem to pass and Picard learns to live this life as Kamin, starting a family of his own and studying the planet’s atmosphere and nature as it seems on the brink of collapse. Once Picard is an old man, the town reveals to him they have been dead for a thousand years after their system’s sun went nova and, with no way to evacuate their planet, launched a probe with the essence of their community and spirit in the hopes of passing their culture onto someone else. Picard wakes from the probe and discovers what was decades to him has only been 25 minutes on the Enterprise and seemingly comes away with a new appreciation of life.

‘The Inner Light’ is quite a different episode for both the Picard character and Patrick Stewart as they are separated from the Enterprise crew for almost the entire episode. Watching Picard integrate himself into the Ressick community and become more comfortable with his Kamin identity opens up a different side to him as he becomes a leader and teacher in their village, yet still retains some of Picard’s central traits like his scientific curiosity and desire to help a civilization. It also affords Picard the opportunity for a life he can never really have as captain of a starship, one that includes a wife, children and grandchildren. It is quite something to see Picard live a full and completely different life and the effect on him by the episode’s conclusion is quite clear. The only keepsake he has of his life as Kamin is a flute the people of Ressick left in the probe, one he learnt to play during his life there. The way Picard silently cradles it to himself speaks volumes. 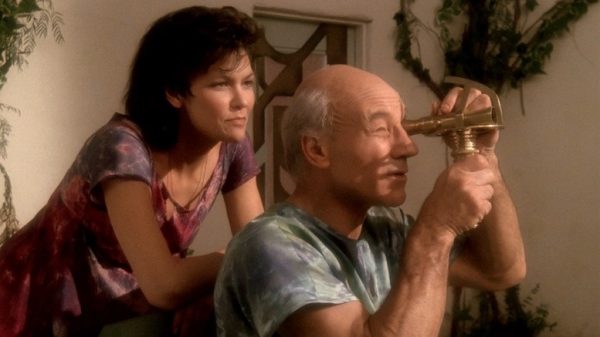 It may sound like a broken record at this point, but it is always worth emphasizing how great Patrick Stewart is as Jean-Luc Picard. ‘The Inner Light’, though, gives him a wider berth to work with as he slowly morphs out of his role as Picard into Kamin. He also gets to work with much more emotion that he usually puts into Picard as he starts a family and reflects on how he never really wanted children until he had them with his wife, Eline. On that note, for people who are starring in TNG for the first time Stewart has a lot of great chemistry with the guest cast but none more so than Margot Rose as Eline. The two of them do great work together as their relationship progresses through the years and Picard comes round to viewing her as his partner rather than a stranger. The same can be said for Richard Riehle’s Batai, Kamin’s best friend and a well-liked leader in Ressick. Their friendship feels authentic and only grows more over the years. It even turns into a literal family affair as Stewart’s son, Daniel Stewart, plays Kamin’s son in a scene where they discuss his future. Picard/Kamin’s relationships with the people of Ressick makes Rose and Riehle’s final moments where they reveal the truth to him all the more emotionally impactful.

‘The Inner Light’ deals with a few themes that become important to Picard over the next few years. Its story examines the power friendship and family can have in one’s life as well as the effects of time. The people of Ressick don’t even want anything in return or plot some kind of way to live on past their death. They simply want their community and way of life to be remembered. Through them, Picard learns to cherish the time he has with his friends of the Enterprise more along with making some room in his life for possible romantic opportunities. The Season 6 episode ‘Lessons’ sees Picard and a new officer aboard the Enterprise sparking a relationship through their love of music and he relates to her the story of Ressick and how it changed him, even playing the melody he learns in this episode as he remembers the importance of opening up. Even in the future portion of the series finale ‘All Good Things…’ he finally gave into his feelings for Dr. Beverly Crusher and they were married for some time before separating, something he might not have been able to do before this. He also expresses his sentiment, “Make now always the most precious time. Now will never come again”, with a slight variation in the film Star Trek: Generations to Riker. It can’t be understated how important this episode is for Picard. 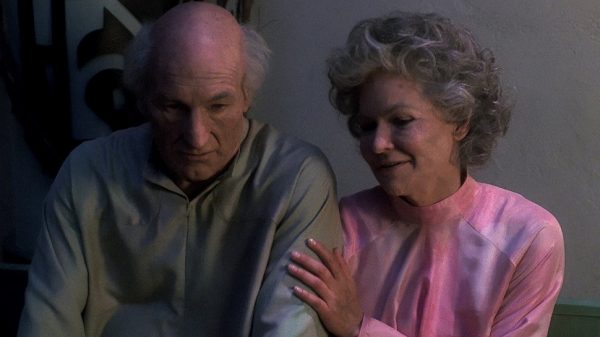 It’s easy to see why ‘The Inner Light’ is not only a continuously ranked favourite of TNG, but Patrick Stewart’s personal favourite episode. He gives a great performance alongside a bunch of unfamiliar actors to the series and conveys the weight of Picard’s life in Ressick quite well once he’s out of his coma. The guest cast similarly does great work and the story’s focus on the effect time, friends and family can have on a person is examined very well through the emotions it garners. ‘The Inner Light’ may not have world ending consequences or huge stakes, but its personal and introspective story makes it a must-see.