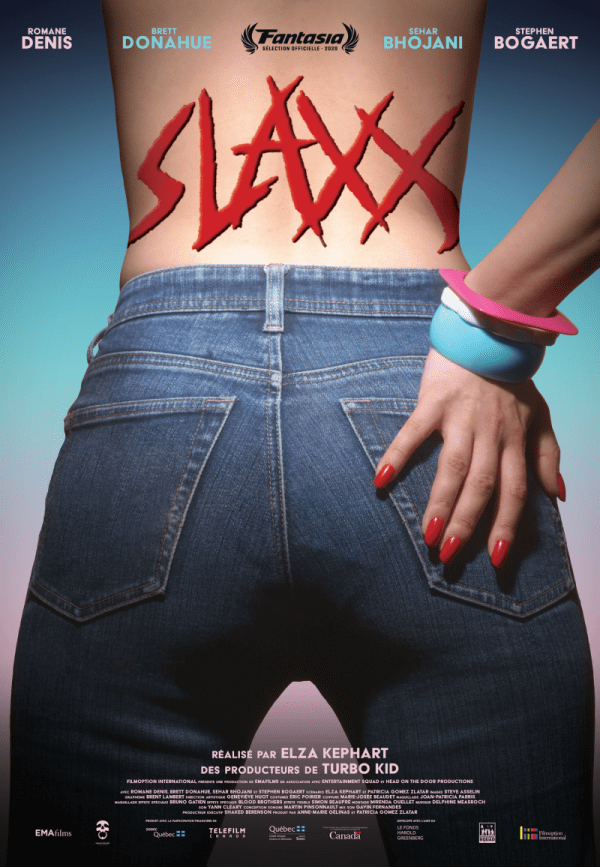 When a possessed pair of jeans begins to kill the staff of a trendy clothing store, it is up to Libby, an idealistic young salesclerk, to stop its bloody rampage. 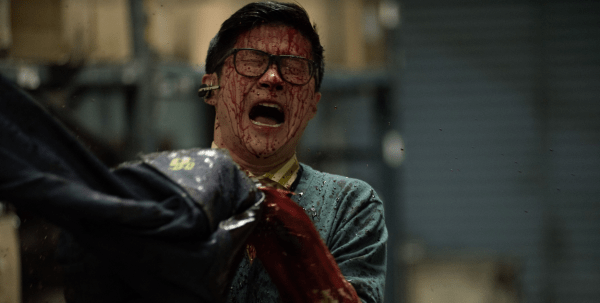 Director Elza Kephart does for Levi’s what Quentin Dupieux’s Rubber did for Goodyear tyres a decade ago, while dishing up an entertainingly daft consumerist satire, albeit one which doesn’t nearly take things as far as it could (or should).

Supposedly ethical, GMO-free clothing store Canadian Cotton Clothiers is prepping for its upcoming “Monday Madness” event, where they plan to unveil their hotly anticipated new “Super Shaper” jeans, a “gender inclusive” designer line which will adapt to the body size of their wearer. Just as wet-around-the-ears employee Libby (Romane Denis) starts her first shift at CCC, however, a pair of the jeans comes to life, violently revolting against anyone staying overnight in the store getting things ready for the launch.

The very first thing we see in the hilariously-monikered Slaxx is endless rows of cotton fields, where Indian labourers work themselves literally to death in order to line the pockets of CCC’s executives. As Kephart herself admitted in a pre-film introduction, Slaxx has no pretensions to subtlety whatsoever, taking righteous aim at not only a fundamentally gross, predatory retail industry, but soulless, disingenuous capitalism as a whole. 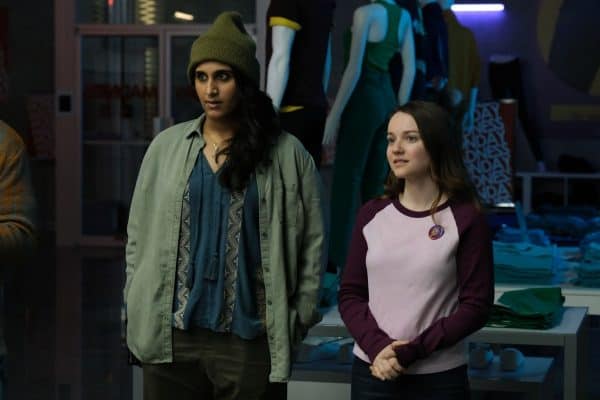 Beyond capturing the plight of far-flung, exploited labourers, Kephart also leaps off to skewer the transparency of corporate “humanity”; the insincerity of brand-driven “inclusion” and “humanitarian” initiatives, which even in their better-intended instances are difficult to view as anything but well-balanced business calculations. Kephart’s film cannily reminds us that corporations – even the “nicer” ones – are not our friends.

Again, this satire is neither subtle nor particularly deep, but it is punchily effective thanks to both the wryly funny dialogue – especially the constantly patronising corporate babble spewing from the mouth of CCC’s regional manager, Craig (Brett Donahue) – and its wider aspirations as a horror film.

Indeed, the primary appeal for many will be getting to see a sentient pair of jeans murdering willing participants in the capitalist system. And while the on-screen body count is surprisingly low by film’s end, what we do see is certainly delivered with fittingly gnarly relish; the victims having their legs awkwardly manipulated by the jeans, as well as the disembowelments and dismemberments that follow. 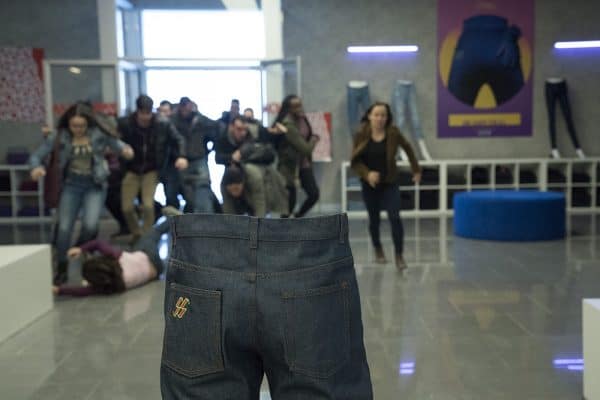 Frustratingly, a number of characters are killed off-screen, and while you might be hoping for the premise to finally go full ham in act three, it sadly never really happens; there’s a disappointing focus on the humans instead squabbling amongst themselves. It never reaches that barmy apex one might reasonably expect, even if it does introduce a few unexpected surprises later on, especially the darkly comic means through which the film literalises its own message.

Slaxx is certainly well made, at least, and with a mere 77-minute runtime, ends long before it outstays its welcome. Kephart’s smart camerawork finds creative ways to depict the jeans’ movement on an evidently low budget without a ton of goofy animation; rather, there’s a charmingly jerky, almost stop motion-like style to some of the more complex maneuvers the jeans make (especially when they dance!). Oh, and make sure to stick around for the end credits to see exactly how she pulled it all off.

The cast also does solid work here, especially Denis as the fresh-faced, naive new shop-worker, and Donahue as the hilariously insufferable regional manager tosspot. Character development isn’t a huge deal here, but the roster at least has enough shade to seem more substantial than your average slasher film meat-puppets. 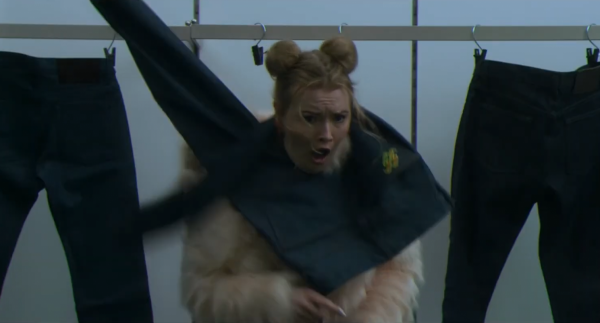 It moves fast, delivers some neat blood-letting, and offers up a little food for thought, and while it may not be perfect, it more often than not delivers on the expected silliness. Slaxx doesn’t quite achieve its full gonzo potential, but might give you a moment for pause the next time you slip on a pair of jeans – for more than one reason.