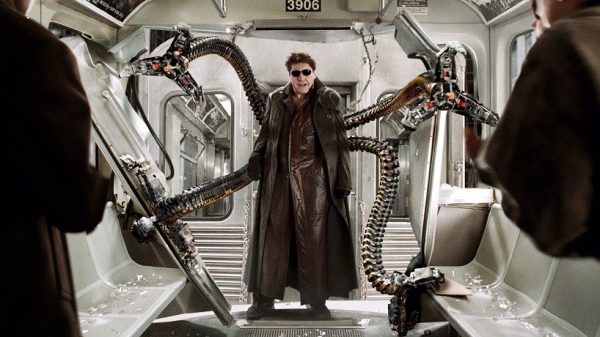 Sony and Marvel surprised fans last month when it was announced that Jamie Foxx is set to portray the villain Electro in the as-yet-untitled Spider-Man 3, reprising a role he played in The Amazing Spider-Man 2 – Sony’s previous Spidey incarnation.

The news – followed by the announcement that Benedict Cumberbatch’s Doctor Strange is also set to feature in the film alongside Tom Holland’s wall-crawler – certainly got tongues wagging about a potential Multiverse/Spider-Verse crossover in the upcoming film, with Sony even going as far as to deny a report that Tobey Maguire and Andrew Garfield are being lined up to return as their respective web-slingers.

While that remains to be seen, a new rumour from Geeks Worldwide is suggesting that Spider-Man 3 will link to Sam Raimi’s original trilogy by featuring the return of Spider-Man 2 star Alfred Molina in the role of Dr. Otto Octavius, a.k.a. Doctor Octopus!

According to the report from the site, Molina has already joined the production and is now filming scenes for the sequel after rehearsing stunt choreography. Similar to Jamie Foxx’s Electro, it’s apparently unclear whether Molina is playing the same version of Doc Ock as he did in Spider-Man 2 (presumably resurrected somehow), or a new incarnation of the iconic villain.

It’s worth noting that this report is yet to be corroborated by any other sources, but at this point all signs are suggesting that Spider-Man 3 will feature some sort of multiverse shenanigans, and so what better way to play with that than by referencing past and alternate incarnations of the character?

The Untitled Spider-Man Sequel is slated for release on December 17th 2021 and reunites Tom Holland with director Jon Watts and his Homecoming and Far From Home co-stars Zendaya (MJ), Marisa Tomei (Aunt May), Jacob Batalon (Ned Leeds) and Tony Revolori (Flash Thompson). Also featuring in the cast are Benedict Cumberbatch as Doctor Strange and Jamie Foxx as Electro.