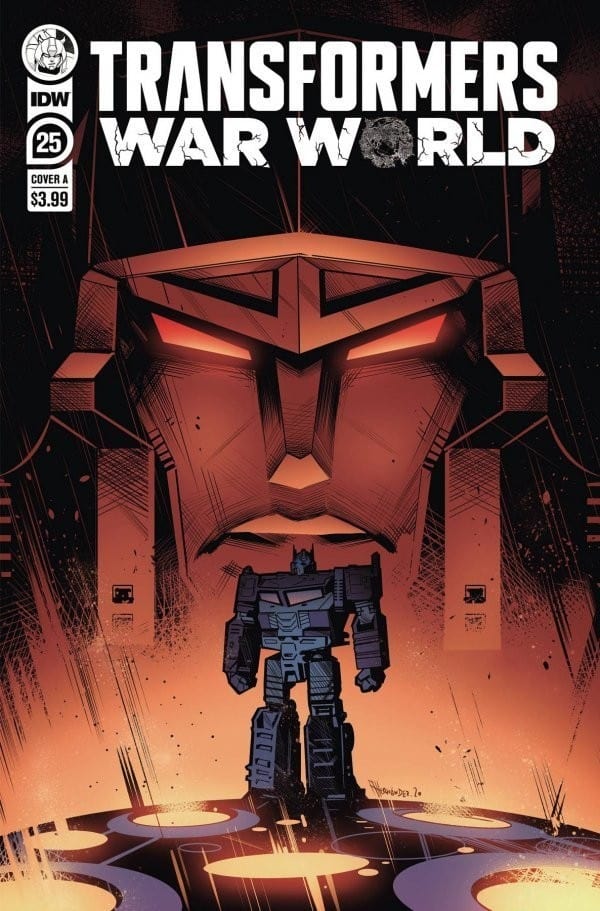 Nothing on Cybertron will be the same again as the anniversary issue of Transformers sees the beginning salvo of the war between the Autobots and Decepticons. ‘War World’ is an apt title for the new arc of the series as Brian Ruckley wastes little time establishing the growth of the conflict as Megatron lays out his newfound order to Cybertron and Orion Pax takes a very large step toward who he is meant to be.

One of the most appealing aspects to Transformers #25 is the large ensemble cast at play throughout the story. Throughout his run Ruckley has often utilized secondary or lesser known bots more than the typically popular ones like Optimus, Megatron, Starscream and others. It was very cool seeing Ironhide leading a bunch of Autobots, again ranging from well-known ones to obscure ones, on a rescue mission for everyone Megatron was holding captive which included Sentinel Prime and Orion. The mixmatch group made a nice team with some both fun banter and good character moments, such as Prowl lamenting hearing Rubble’s murder or Hound and Kup talking about their plans. Even lesser-known Decepticons like Strika and the ‘Rainmakers’ got some fairly significant parts to play, especially toward the end of the issue.

Of course, though, it wouldn’t be the start of Cybertron’s Great War without a strong focus on Orion Pax and Megatron. Ruckley’s handling of Megatron throughout his run has been some of the best writing for the Decepticon leader we’ve gotten. It doesn’t beat James Roberts’ take on the character in IDW’s previous continuity, but is still quite good as Ruckley shows the beginnings of Megatron’s tyranny. While he believes he’s acting for the greater good of Cybertron and is a noble figure, there’s a lot in his various speeches that show his growing ambition and newfound ruthlessness. It is also a very interesting character beat that, even with his hatred of Sentinel Prime, he completely loses his composure in his brief scene with Orion, a fact that displays the extent of Orion’s ‘betrayal’ and the depth of their soon-to-be rivalry. One thing that did stand out, though, was Megatron was at one point drawn with his classic arm cannon, though there was never a scene where he chose to wield the weapon. Much like Optimus gaining the Matrix of Leadership or Indiana Jones wearing his hat for the very fist time, Megatron choosing choosing his arm cannon should have been a big and iconic moment that firmly establishes who he now is. It would have been very nice to have seen Megatron’s decision in picking that particular weapon as his chosen one.

As for Orion, he didn’t get much time in the issue until the latter half, but still received some good characterization as his priority was on the safety of everyone else in the rescue team. If there is one thing that is a shame, it is the demise of Sentinel Prime. He had not been in the series for very long and though his attitude was that of a harsh, impatient leader who often did not take the advice of his underlings, it still would have been nice to have seen his character fleshed out a bit more before his death. Nevertheless, the passing of the Matrix scene was definitely a pleasing moment as Orion reluctantly took on the burden and became Optimus Prime. The hesitancy he showed, both before taking the Matrix and within his vision in the Matrix, was perfectly in character as Optimus has never been one about power, fame or ambition, but of leadership and a chance to serve. Now that Orion has finally changed into his destined form, it will be interesting to see how Ruckley writes for Optimus.

The art from Anna Malkova was nothing short of excellent throughout the issue. Usually on a double-length issue like this there might be one or two other artists assisting with art duties since it is such a long book, but as the sole illustrator Malkova soars. There is plenty of detail in her images, from the way the characters carry themselves to the choreography of the action. Malkova also makes each face looks very emotive as the tension rises with each passing page. Joana Lafuente also did a great job on the book’s colours, making each and very image stand out with a great blend of different colours for the scenery and characters. Malkova ad Lafuente make a great team and this issue as a prime example.

Transformers #25 is a great opening for this new arc as the battle between Autobots and Decepticons finally begins in earnest. Ruckley’s take on Optimus and Megatron is well done while his focus on other transformers is well appreciated and opens up a lot of interesting doors. Malkova and Lafuente’s artwork is simply great just to look at, but the two know just what to focus on and how to convey a character’s feelings while doing so. As the turning point in the series, Transformers #25 is a great read.