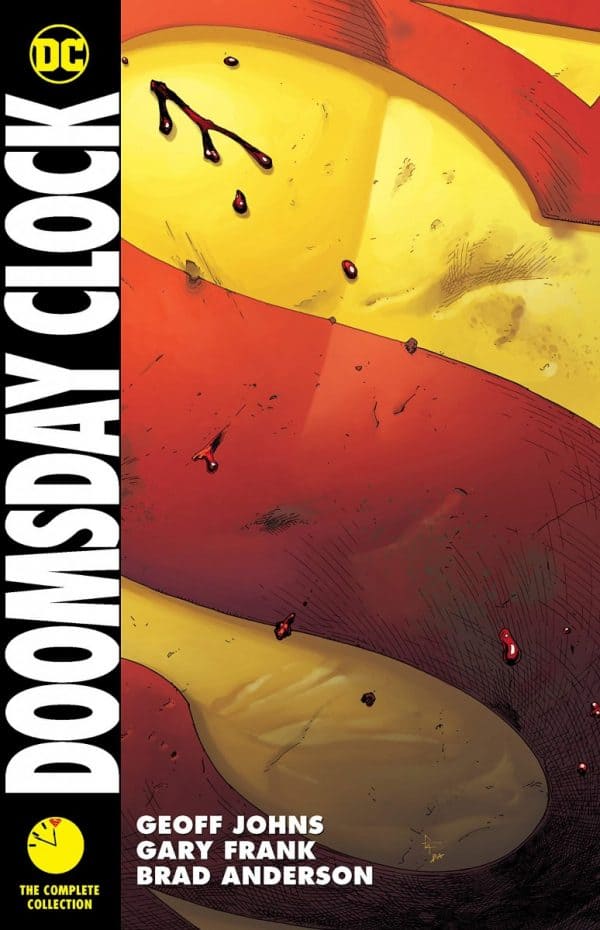 It is funny that within the last couple of years we’ve gotten not one but two sequels to the groundbreaking graphic novel Watchmen in two different forms of media and context. HBO’s Watchmen delivered a miniseries that is a direct sequel to the graphic novel while DC’s Doomsday Clock is, like the original, a 12-issue limited series that is a semi-sequel as characters from Watchmen crossover into the DC Universe, setting a collision course between their universes most powerful beings: Dr. Manhattan and Superman.

Geoff Johns has written many great and beloved stories during his tenure at DC, most recently Batman: Three Jokers, but Doomsday Clock may be his magnum opus not just on the DC Universe, but the comics medium as a whole with his examination of the characters longevity and place in pop culture. It’s an engrossing story as deep as Watchmen as Johns looks at the differences between the heroes of DC and ‘heroes’ of Watchmen, reflecting on the inherent cynicism of Moore’s world against the never-ending hopefulness of the DC Universe, even if some DC stories, characters or reboots are more grim than others. Much like Watchmen as well, Johns uses Doomsday Clock‘s story as a means to reflect on the turbulent years of our present, focusing on how cynicism has taken hold seemingly worldwide while still providing a healthy amount of escapism for comic readers with the character pairings throughout the story.

Doomsday Clock spins out of DC’s line-wide reboot of The New 52 where the publisher pretty much reset the clock for every hero, erasing long-held relationships, such as Superman’s marriage to Lois Lane, sidekicks or legacy characters like Wally West’s Flash, and even the past heroes of the Golden Age of comics with the original Flash, Green Lantern and others from the Justice Society. This was the way DC moved forward until their next reboot in 2016’s DC Rebirth, where Johns made the stunning revelation it was Watchmen‘s Dr. Manhattan who was responsible for these erasures for unknown purposes after leaving his universe in the final pages of Watchmen. Thankfully for any new readers, you don’t need to know a whole lot of this information going into Doomsday Clock. Even though Johns and other DC writers built it up through several other stories prior, like Superman Reborn or Batman/The Flash: The Button, Doomsday Clock still acts as its own narrative with only passing references to some of those stories, allowing it to succeed on its own merits.

The structure of the graphic novel is pretty interesting as the first half is very Watchmen-heavy while the second is very DC-heavy. This allows us to get back in touch with the world of Watchmen and catch up with the characters, both new and familiar, in the years after Ozymandias’ grand scheme to achieve world peace through the slaughter of millions. The ‘what if’ scenario the original story ended on had a lot of intriguing possibilities and Johns picks that potential up very well, especially with the new Rorschach who has quite a tragic backstory in the wake of Ozymandias’ plot. He and the other new characters, Marionette and Mime, are pretty interesting additions to the Watchmen universe. Comparisons can be made to Marionette as the Harley Quinn of Watchmen, but that would be disingenuous as the only similar thing about them is their clown-like look and some of Marionette’s slapstick behaviour. Marionette is a pretty ruthless character with the only person she shows any emotion to her husband, Mime. The pair of criminals make quite a duo, both with the way they fight and how the conduct their relationship. The only shame is that the second half of the book doesn’t feature them or Rorschach near as heavily as the first, putting them off to the sidelines.

The main focus, though, is on Dr. Manhattan and Superman and the dichotomy between them. Despite not appearing on the page nearly as much as some of the other characters, the story centers entirely around them that when they do physically show up it is quite a powerful moment. Johns makes some very intriguing parallels between these two beings, such as the fact Superman is, as Manhattan describes, a “man of action” whereas Manhattan is a “man of inaction” content to let things play out without his intervention, doing things more out of curiosity than any moral reason. Nothing examines this better than Doomsday Clock‘s tenth chapter, which may very well be the finest thing Johns has ever written, in a love letter to Superman’s enduring status as a hero and pop culture icon. The conflict between Superman and Manhattan is much more philosophical than it is physical with the ideas around their abilities, morality and actions and pays off in some very exciting and meaningful ways.

When the story was published issue by issue, much was made of the series’ constant delays as it moved from a monthly release to bi-monthly if not longer at points. However, it was all worth it just for the art alone as Gary Frank illustrates some outstanding imagery. It is clear just how much work and care went into this book as Frank’s drawings are incredibly detailed, even to the point of evoking Watchmen‘s 9-panel grid throughout most of the book to make this feel even more connected to Moore’s original story. Frank’s character work is great with so much detail on their facial expressions and the most subtle shifts in their faces. The action sequences have quite a lot going on in them, but Frank never loses sight of what’s going on or where the focus should be, creating some very wild fights. Brad Anderson’s colours compliment Frank’s artwork very well, providing a lot of vivid imagery that makes the book’s art even richer. For all the delays that happened at the time of publication, it is so much better the story was able to be completed with the same art team throughout and Frank and Anderson’s commitment show on every page.

The one thing missing from this collection is some bonus material on the work behind the series. Like Watchmen, there’s supplemental material between chapters adding to the scope of the story, such as newspaper clippings, diaries, etc., but when it comes to bonus material the only thing featured is a collection of covers from Frank and Anderson. There are no sketches from Frank or thoughts from Johns or anyone else at DC looking back on Watchmen or of how this series was developed, which is a bit of a shame. It is likely, though, these types of bonuses are being held back for the eventual Deluxe and hopefully even Absolute editions, but even without extra material Doomsday Clock is well worth picking up for the power of the story, Johns’ focus on Superman and Manhattan and the artwork from Frank and Anderson. Any fan of DC or Watchmen will very likely see it as a worthy successor to the original.