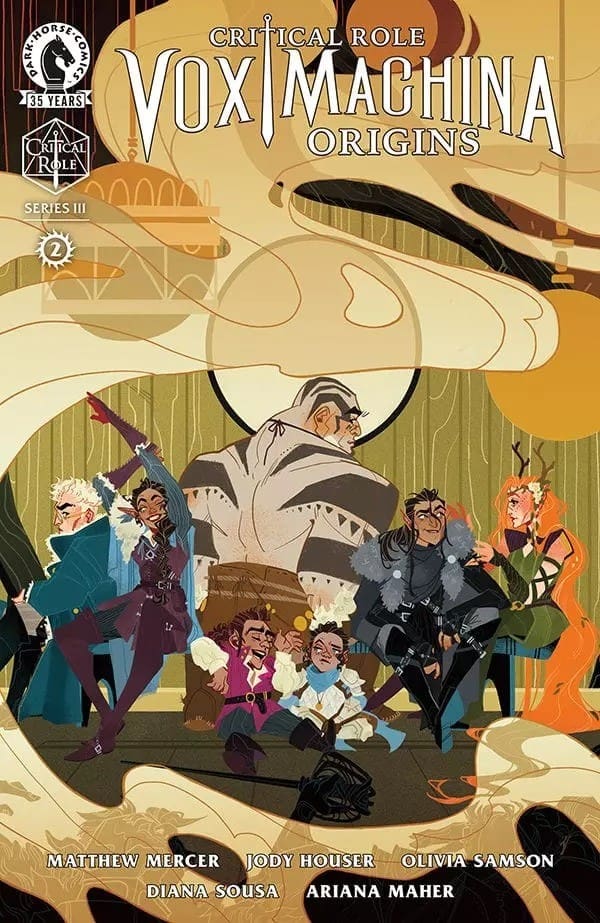 As we return to Exandria, the legends of Vox Machina grow more righteous (or notorious) by the day. The future heroes of Tal’dorei are still relatively early on in their story, and yet that does not mean that their journey is any less entertaining.

In the last issue we saw our trepid adventurers blowing through cash and in desperate need of a pay day. When the proposition of easy money comes from a shady halfling gentleman, why would you not follow him?

The last issue ended with Vox Machina stepping into the ring for their first round battle in the fight pit, and we pick up just as the clash begins. Considering that we are transferring the actions of a D&D game into a comic book, it is all the action with none of the dice rolling antics. The fight sequences are played off very nicely with lots of humour and nods to the character interactions from the show thrown into the fray.

The beautifully drawn artwork justifies  the wait we have between the issues, and each frame shows not just the characters but also the emotion and reactions that they are feeling. An act that is maybe not difficult to pull off, yet very hard to pull off in the way that Olivia Samson completes with ease.

The story  shows the team battling through the rounds in an attempt to win the big pot at the end of the tournament. They are hounded by one team in particular, which Grog sees as the biggest challenge as there is someone nearly as big as him and quiet possibly as strong. Fans of the show/podcast will know that Grog cares more about the challenge than the prize at the end, for his challenge to be the strongest person in any city at any time fuels him more than anything. The issue comes to an interesting head where the tournament is possibly stacked against our adventurers, but do you think that will stop them?

Critical Role: Vox Machina Origins Vol. 3 #2, much like all the issues in this series, put a smile on my face. The references, the jokes and even just seeing the world of Matthew Mercer’s imagination coming to life is exciting. The hard work these people put into making a D&D game a worldwide phenomenon is paying off, as they have created a brand, a following and a whole new generation of D&D players.

The influence Critical Role has had on modern culture is proof that everyone on some level loves escapism, we love to delve into our imaginations and live out the heroic fantasy roles. Imagination is a wonderful thing that should be exercised by everyone everyday.