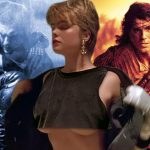 Tom Jolliffe ventures back 30 years to 1992, a year full of breakouts, action spectacle, iconic soundtracks and more… In my retrospective delve into the year of 1982, I boldly claimed that it might have been the greatest year of film ever. As I thrust my time machine forward a decade, I wandered the cinematic […] Michael Biehn, one of the stars of Aliens, is going to reprise his role for a new Alien 3 audio drama. Aliens is certainly one of the classic sci-fi movies of all time and a truly worthy sequel to the original sensation that was Alien. While there have been subsequent sequels after Aliens, writer William […] Dark Horse Comics has announced that it is dusting off legendary sci-fi author William Gibson’s unproduced original script for Alien 3 for a comic book adaptation from writer and artist Johnnie Christmas. “When your first contracted screenplay (or screenplay of any kind, in my case) isn’t produced, but the film is eventually made with a […] Anghus Houvouras on whether the Alien franchise is exhausted… Is the reason almost every Alien movie since the original has been, at best, a mixed bag because the premise has been exhausted? I thought about this the other day as I watched a slew of Alien: Covenant reviews pour in. Like Prometheus, it seems to […]

Henry Bevan with an open letter to David Fincher… Dear David, I’m going to jump right into it: you should consider lobbying to direct the next Alien movie, whatever it may be. Don’t stop reading! I know your last experience of the franchise on Alien 3 was a clusterfuck and you felt your career was being […]

Ben Robins ranks every single sequel, prequel and spin-off from the Alien series, ahead of the latest addition, Alien: Covenant.  With the long-awaited Alien prequel/sequel Covenant very nearly upon us, it’s time to once again dig up one of sci-fi’s longest-running franchises, to finally, and definitively, separate the classic, from the garbage. Few expected a […]

With Alien: Covenant just around the corner, Sean Wilson looks back at the illustrious musical heritage of one of cinema’s greatest franchises… Just recently I was listening to the score for the imminent Alien: Covenant, Ridley Scott’s return to the sci-fi horror franchise he inaugurated, and was struck by the plethora of material from Jerry […]