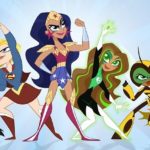 We chat with composer Michael Gatt about DC Super Hero Girls… DC Super Hero Girls have been around since 2015, originally premiering with a toy line and webseries, but when Emmy winning writer/producer Lauren Faust announced she was relaunching the series for Cartoon Network fans and critics immediately began anticipating the return. One of the […]