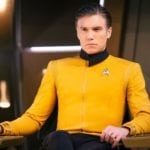 Last year, Star Trek returned to television for the first time in 12 years with Star Trek: Discovery, another prequel in the franchise that is set 10 years before Star Trek: The Original Series. The first season of Discovery held a lot of surprises for fans in an action packed and intriguing introductory season with a memorable cast of characters. Now […]

As we await word on a premiere date, CBS has announced five new additions to the cast of Star Trek: Discovery, the upcoming TV series set ten years prior to the events of Star Trek: The Original Series. Shazad Latif (Penny Dreadful) is set to play Starfleet officer Lieutenant Tyler, Rekha Sharma (The 100) will […]

Star Trek: Discovery has added three new cast members to the show: Chris Obi (American Gods), Shazad Latif (Penny Dreadful) and Mary Chieffo (Miss Dial) will all star as Klingons, who, at this point in the Star Trek timeline, are still considered enemies of the Federation. Obi will play  T’Kuvma, a Klingon leader seeking to unite the various […]