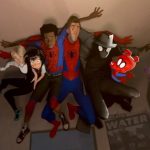 Matthew Lee on the overlooked summer gems of 2015… As the summer season officially draws to a close, which, for most studios, means an end to the blockbuster bonanza (though, once again, Warner Bros. are going against the grain as they release Pan in October. Didn’t Jupiter Ascending’s reception teach them anything?). During this cluster […]

UK box office top ten and analysis for the weekend of Friday 10th to Sunday 12th July 2015… Universal’s animated smash hit Minions made it three weeks in a row at the top of the UK box office chart this past weekend, fending off competition from Ted 2 to retain first place with a £4.15 […]

Ahead of its UK release this Friday, StudioCanal has debuted a new clip from director Tomm Moore’s acclaimed animated feature Song of the Sea entitled ‘Seanchaí’; check it out below after the poster and official synopsis… SEE ALSO: Watch the trailer for Song of the Sea here In this enchanting new story from the Academy […]

Tomm Moore’s (The Secret of the Kells) acclaimed animated feature Song of the Sea opens here in the UK next week, and StudioCanal has debuted a new clip entitled ‘Saoirse’, which you can watch below… SEE ALSO: Watch the trailer for Song of the Sea here In this enchanting new story from the Academy Award-nominated […]

Ahead of its release next month a new UK trailer and poster have arrived online Tomm Moore’s animated film Song of the Sea, which we have for you here… In this enchanting new story from the Academy Award-nominated director of The Secret of Kells, Ben and his little sister Saoirse—the last Seal-child—must embark on a […]

Fresh from its nomination for Best Animated Feature at the 87th Academy Awards, a trailer has arrived online for Tomm Moore’s animated film Song of the Sea, which you can watch below after the official synopsis… In this enchanting new story from the Academy Award-nominated director of The Secret of Kells, Ben and his little […]