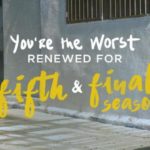 FXX has decided today to renew its comedy series You’re The Worst for a fifth and final season in 2018. The show, created by Stephen Falk, is a twist on the romantic comedy genre by focusing on a cynical writer and his equally cynical publicist, played by Chris Geere and Aya Cash, as they begin an up-and-down […]