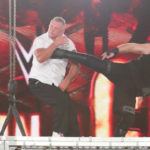 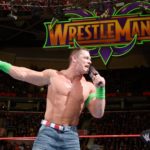 It’s WrestleMania week, with the ‘Show of Shows’ set to take place on Sunday night. Every day between now and the big event, Tom Beasley takes a look at a different element of the build-up. This time, it’s the strange path to John Cena vs. Undertaker and how WWE has played with fan expectations… For […]

Oli Davis rounds up the biggest professional wrestling news in his daily WrestleTalk column… How WWE Should’ve Booked Undertaker Vs Roman Reigns ‘Smart’ professional wrestling criticism and fantasy booking isn’t just consigned to Internet fandom, four-year-olds also like to do WWE’s job better than them too. Michelle McCool has posted a photo of her and […]

Oli Davis rounds up the biggest professional wrestling news in his daily WrestleTalk column… Normally I would say, ‘happy belated birthday John Cena’, but when WWE’s biggest star was about to turn 40 yesterday, he kicked out at 39. Vince McMahon tweeted his favourite big, sweaty man: “Hustle Loyalty Respect” is not just an expression, […]

Oli Davis rounds up the biggest professional wrestling news in this twice-daily WrestleTalk column… It’s been a week now since The Undertaker seemingly retired from professional wrestling, leaving his coat, hat and gloves in the middle of the ring after his Wrestlemania defeat to Roman Reigns – an act which, again, I must point out […]

After the four hour Hall of Fame, two-and-a-half hour NXT TakeOver, seven hour Wrestlemania, three hour Raw, two hour Smackdown, one hour 205 Live and one hour NXT, you’re either sitting there going, ‘I can no longer survive on anything less than 24 hours of original in-ring wrestling programming every week’. Or, like me, you […]

With Wrestlemania 33 set to run just shy of 27 hours, missing the pre-show seemed like a good way to reduce that butt-numbing length. But then WWE added Austin Aries vs Neville to the kickoff show. And the Andre the Giant Memorial Battle Royal, complete with bonus Braun Strowman. Fans were annoyed – particularly over […]

One of the better wrestling memes floating around the Internet is the image of Triple H congratulating Triple H on winning a championship belt – poking fun at Triple H’s ‘My NXT person just won a title’ selfie habit. Getting in on the Wrestlemania AXXESS festivities, Triple H has tweeted an image of his latest […]

Happy belated birthday to The Undertaker! I’m not really sure how that works, him being a Deadman and all. I suppose it would be a Dead Day. Happy Dead Day, Undertaker. The Phenom celebrated like any self-respecting supernatural wrestling character would – taking a selfie with their wife.  View this post on Instagram Happy birthday […]

Mick Foley No More Mick Foley opened the show announcing his leave of absence effective immediately, reading a prepared statement from some index cards. But then good gawd almighty, he broke those index cards in half! Ripping the statement into shreds, Foley began to cut an impassioned promo, but his microphone was cut off. And […]