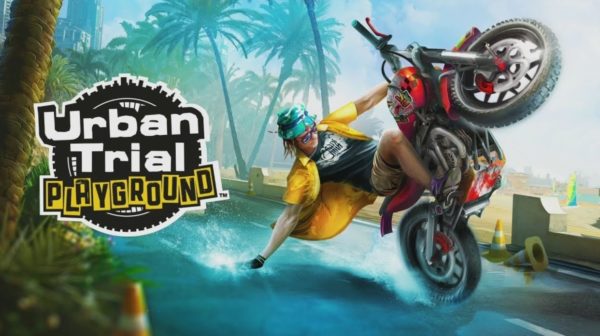 With the glut of belated ports hitting the Nintendo Switch every week, it’s genuinely attention-grabbing when an exclusive indie title arrives on the eShop. However, with its clear intent to ape the illustrious, fiendishly difficult Trials racing franchise, it’s hard not to treat Urban Trial Playground as an ersatz – if moderately enjoyable – imitation.

The gameplay is simple; players must navigate their way through 50+ levels of rickety terrain on a motorcycle, either beating a designated lap time or trick score in order to win stars and unlock the next track in the list. Much like Trials, the core loop is heavily reliant on physics and the player’s understanding of it, delicately exploiting momentum and balance to their advantage to pull off the gnarliest tricks and speediest lap times.

The key difference here is that Urban Trials Playground is a far more forgiving offering, with not a single one of its tracks posing anything approaching a challenge you’ll need to attempt more than twice to proceed. There are none of the controller-throwingly brutal jumps, awkward nooks and seemingly impossible climbs that have made the Trials franchise so enduringly popular. As such, if you’re expecting this to be the Switch’s answer to that series, you’ll probably be a little underwhelmed by how utterly pedestrian and lacking in difficulty it is.

To its credit, the gameplay does at least introduce a few additional wrinkles; players can use the ZL and ZR buttons to independently control the front and rear brakes, the Switch’s left analog stick can be used to launch into air (especially useful at the height of a ramp, of course), and players can also crouch downward to avoid the occasional incoming obstacle (of which there are surprisingly few throughout the game). 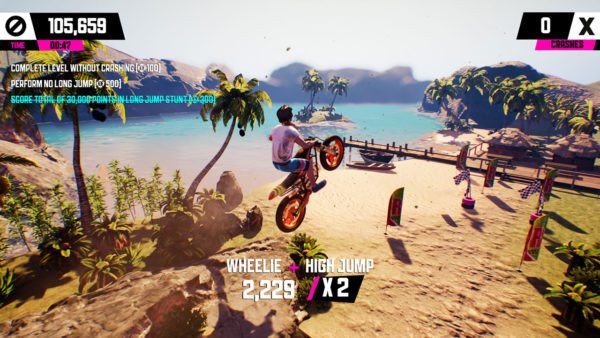 Ultimately, though, the game never feels as nuanced or expertly crafted as the Trials titles, offering a simpler, more stripped-down experience squarely with casual players in mind. To that end, the two-or-so hours it takes to blast through the levels will at least fly by easily enough. Moreover, completionists will find plenty of added play-time in tackling each level’s added challenges and hoovering up the array of collectable poker chips (which can be exchanged for new bike parts and cosmetic items).

Games like this typically offer up a wide suite of customisation options for players, so it’s a surprise that Urban Trials Playground‘s outfitting suite feels so scant. Whether you’re looking to trick out your bike with a new engine or buy your rider a new shirt, there are generally only four or five choices a-piece, making this aspect of the game feel depressingly malnourished.

Speaking of malnourished, it’s a shame the levels on offer quickly end up recycling the same small selection of tracks, merely switching-out the objectives between time attack and point attack with virtually no variation on this formula. Most levels won’t take you more than a minute a-piece to complete, but even so, some alternative riffs on the same sun-kissed palette would’ve been very much welcome, not to mention some more eccentric completion conditions or even a few quirky boss stages.

Given the overall emphasis on perfection and the run-ruining potential of a small mistake, it’s also rather frustrating that there’s no option to instantly restart a level with the press of a single button, as has been so valuable in the Trials games. While you can quickly restart from your previous checkpoint, restarting the entire track requires you pausing the game, pressing restart and sitting through a loading screen. It’s easy to scoff at this level of impatience, but in a game propelled forward by trial-and-error gameplay, it’s ludicrous that there’s no instant-reset option. 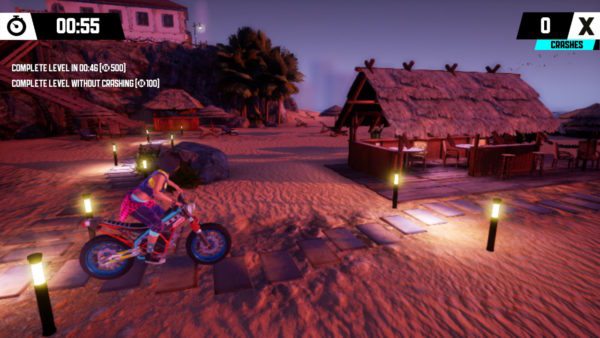 Visually, the game meanwhile looks…fine, though the 30 FPS framerate will surely disappoint many, especially as this is hardly locked, and on several levels the framerate even dips close to 20 FPS.

Nothing stands out texturally, but the game’s constantly-moving nature makes it tough to pick out any especially rough aspects of the environment. Sound-wise, there’s little of interest to report here; the music is pure generic placeholder fare, and the fitful bursts of scant voiceover dialogue might quickly have you lowering your Switch’s volume.

If you tire of the solo experience, you can dive into two-player local multiplayer, either partaking in a good ‘ol fashioned race or a rousing round of motorcycle tag. Disappointingly there’s nothing in the way of online options – aside from a ranked leaderboard – which certainly would’ve injected the game with substantially greater replay value.

When you can buy an actual Trials game for less than a fiver, Urban Trial Playground‘s £17.99 price tag doesn’t seem quite so enticing, even with the obvious benefit of portability. It is light fun at its best, and a neutered knock-off of the classic racing franchise at its worst. More than anything, it’ll likely leave you craving an actual Trials game on the Switch as soon as humanly possible. 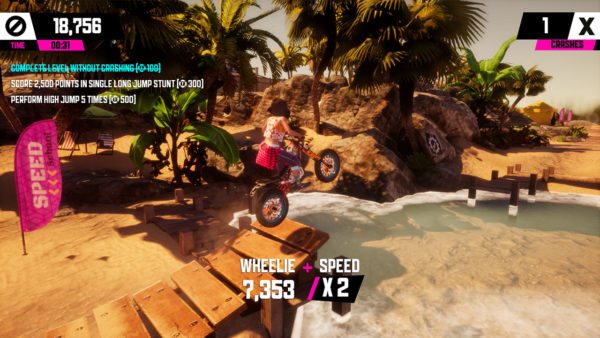