Electronic Arts have officially announced the next installment in the Battlefield franchise, Battlefield V which will arrive for Xbox One, Playstation 4 and PC on the 19th October.  After the success of Battlefield 1 with its World War 1 theme the action will take players to the grim battles of World War 2.  Accompanying the news is an action packed trailer showing explosions, vehicle crashes, gunshots and more explosions. 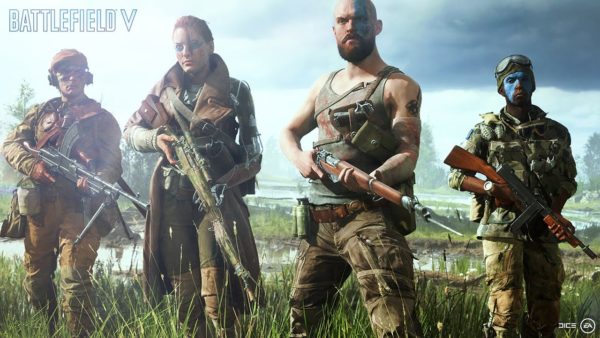 Battlefield V will see the return of the acclaimed single player campaign mode from Battlefield 1 and sees the action of untold stories that span from the the freezing Norwegian landscape to the desert heat of North Africa.

For those wanting multiplayer action, there will be new and classic multiplayer game modes to enjoy that will see players build fortifications and repair war torn structures to gain an advantage.  Soldiers will be able to tow stationary weaponry into more effective positions making a more dynamic and evolving combat environment.

The latest installment in the Battlefields franchise introduces Tides of War as their new approach to live services.  There will be no Premium Pass with Battlefield V so all players will have access to the same maps and modes.  The Tides of War will also include events such as Grand Operations that will encourage playing in different ways.

“Battlefield V is a homecoming for DICE as a studio—a return to the era that came to define the Battlefield franchise. But as nostalgic as we are about World War 2, we wanted to challenge the preconception of the era with an unexpected portrayal of this familiar setting. Our vision with Battlefield V is to let players explore new and untold sides of the conflict that shaped the modern world,” said Oskar Gabrielson, General Manager, DICE. “The scale of each battle and level of immersion is unlike anything we’ve done before in Battlefield and players are in for an epic journey.”

There will be a Battlefield V Deluxe Edition available and those who pre-order will receive three days earlier access.  Those that pre-order any edition of the game will get early access to the Open Beta and other in-game benefits.  There is also the option to download content from Battlefield 1 and Battlefield 4 for free.

Battlefield V will be available on PC and consoles on the 19th October.