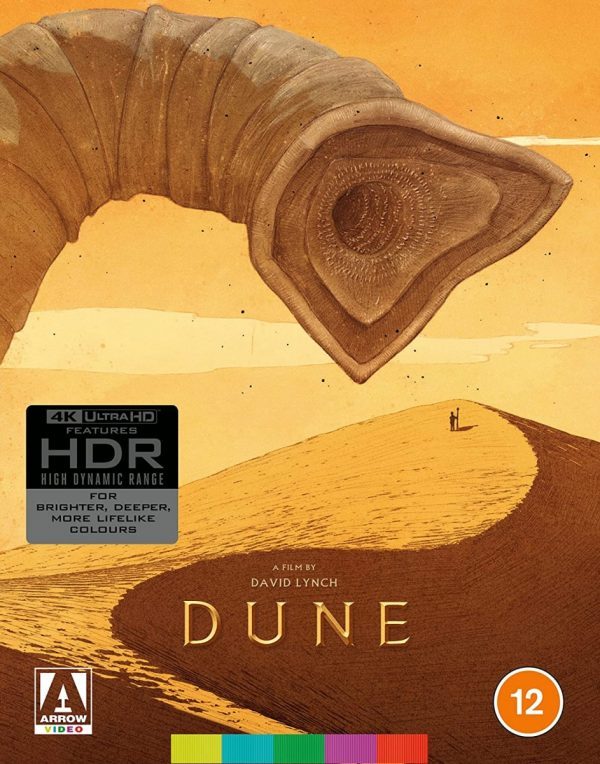 David Lynch’s cult classic adaptation of Dune arrives on 4K courtesy of Arrow Video, which commissioned a new restoration of the movie along with new bonus features and some nice physical extras, including a 58-page perfect-bound book. This one is worth picking up if you’re a fan.

The timing of Arrow’s release of David Lynch’s Dune on 4K Ultra HD Blu-ray disc was almost certainly timed to coincide with the buzz around Denis Villeneuve’s upcoming big-budget adaptation. As this review is being written, the new film is expected to be the first installment of a two-part epic, and the jury is still out on its quality.

As for Lynch’s version, well, it’s very likely you’ve made up your mind about this film at some point during the last 37 years since its release. The 1984 version of Dune was a box office failure, but it became something of a novelty during the years since. Like one of its contemporary sci-fi flops, 1980’s Flash Gordon, Dune has been remembered for the audacity of what it set out to accomplish, even if it produced mixed results.

For my money, Dune is a movie with a really solid setup that’s done in by a second half that feels rushed in many ways, between the Cliff’s Notes feeling of the storytelling and the mediocre special effects that probably didn’t make anyone at ILM envious. (I know a lot of people worked long and hard on those effects, but they really pale in comparison to other science-fiction movies of that time period.)

A longer version of the film exists, but it’s not a true Director’s Cut, since Lynch has disowned it and insisted that his credit be changed to “Alan Smithee,” which is common among directors who take their names off movies. Universal put it out on DVD in 2005, but I’m not sure if there are any other home video releases of it. It may be worth tracking down, if you really want to see it, but this version is clumsy, with pre-production artwork used during its opening prologue and deleted footage reinserted with little regard – for example, the same shots are repeated multiple times during House Harkonnen’s attack on House Atreides.

Arrow made an investment in restoring the theatrical version of Dune in 4K from the camera negative. While Lynch has stayed away from the movie and thus didn’t sign off on the restoration, the film looks beautiful here. It has a more muted color palette, so there aren’t a lot of vibrant colors that can pop off the screen, like Arrow’s Flash Gordon 4K, but the contrast is stunning, with deep black levels and no evidence of edge enhancement or other computerized processing. There’s also some grain present, as you’d expect from a movie of this vintage.

Arrow also went above and beyond with this set, commissioning new bonus features and throwing in a set of cards with film stills, a poster, and a 58-page perfect-bound book packed with new and old interviews and essays. Unfortunately, the new feature-length documentary The Sleeper Must Awaken: Making Dune was dropped at the last minute for reasons unknown, although you can still see it in the German version of this set. What’s included, though, is still worth the money for fans.

The new bonus content leads off the accompanying Blu-ray disc with Beyond Imagination: Merchandising Dune, a 22.5-minute overview of the movie’s tie-in merchandise, much of which was ill-conceived. As host Brian Stillman, producer of Netflix’s The Toys That Made Us, explains, Dune wasn’t a movie that lent itself as naturally to toys, lunchboxes, bed sheets, and so forth the way Star Wars did. However, there’s actually a collector’s market for those items today, so if you have any Paul Atreides action figures and Sardaukar birthday party plates in your attic, you might want to see what they’re fetching on eBay.

The other main new featurette is Prophecy Fulfilled: Scoring Dune, which runs nearly 25 minutes and focuses on the rock band Toto’s musical score. If you’ve never heard of Toto, ask your parents (or maybe even grandparents): they made a big splash in 1982 and faded away after Dune, although I imagine they’re still a draw on the 80s nostalgia circuit. Music journalist Tim Greiving narrates much of the discussion over footage from the film and clips of the band, with members of Toto popping in occasionally. A 17-minute interview with make-up effects artist Giannetto de Rossi rounds out the new materials. It’s in Italian with English sub-titles, and it starts off with de Rossi saying that “Dune was sadly ruined, to an extent, by its producer, Dino De Laurentiis, because eventually we ran out of money, and as he’d often do, Dino showed up and went, ‘We need to save money!’ And he’d tear pages out of the script for no discernible reason.” So if you’re wondering what went wrong with the film, there you go.

The rest of the bonus materials are found on the same 4K disc as the film, leading off with two new commentary tracks, one by writer Paul M. Sammon and the other by Mike White of The Projection Booth podcast. Sammon’s name is probably known to many science-fiction film fans: he worked for film studios for a long time before switching gears to write about movies. He directed the 6.5-minute Destination Dune archival featurette that was created in 1983 to promote the movie and is included here. As you might imagine, he does a great job here, since he was around for the making of the film.

Mike White’s track is more from a fan perspective, but it’s as exhaustive as many episodes of the podcast that he co-hosts. He clearly did his homework ahead of time and came prepared, so his discussion is definitely worth your time.

The other content on the 4K disc was ported over from previous home video releases of Dune, but I don’t know if it’s an exhaustive representation of everything that’s been available in the past. It includes:

• Impressions of Dune (2003, 39 minutes): Dino’s daughter Rafaella De Laurentiis, cinematographer Freddie Francis, star Kyle McLachlan, film critic David Ansen, author Harlan Ellison, and others look back on the movie. My understanding is that this documentary hasn’t been available in the United States before.

• Designing Dune (2005, 9 minutes): Set designer Giles Masters, illustrator Ron Miller, art director Benjamin Fernandes, and others talk about the international group of artists who did the design work on the film and overcame their language barriers with visuals. Lynch contributed to the work too.

• Dune Costumes (2005, 5 minutes): Costume designer Bob Ringwood, as well as crew members Debbie Phipps, Michael Jones and Mark Siegel, talk about the distinctive style they brought to the characters’ wardrobes. Fun fact: Sting was supposed to be nude during the scene when he appears wearing nothing but a skimpy bottom, but the studio got nervous and asked for his naughty bits to be covered.

• Deleted scenes: Rafaella De Laurentiis gives a 3-minute introduction to explain that stories of Lynch creating a longer version of the film are myths. Yes, there was a four-hour assembly cut, but that kind of thing is typically created by directors to see all the footage they have to work with before paring it down. Her remarks are followed by a little over 14 minutes of deleted scenes; I don’t know how much of that footage is in the Alan Smithee version.

• Destination Dune (1983, 6.5 minutes): This is that aforementioned featurette that was directed by Paul M. Sammon. It was used to promote the movie at conventions and so forth. There’s a lot of behind the scenes footage found here, and author Frank Herbert even appears at the end to offer some thoughts.

Trailers, TV spots, and image galleries round out the 4K disc.