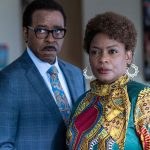 AMC has released a trailer and images for the Michael B. Jordan-produced legal drama series 61st Street which follows Courtney B. Vance as a lawyer fighting against the infamously corrupt Chicago criminal justice system when the police arrest a promising high school athlete (Tosin Cole) as a supposed gang member, accusing him of the murder […]