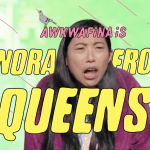 Just one week before its series premiere on Comedy Central, the network has already renewed Awkwafina’s upcoming semi-autobiographical sitcom Awkwafina is Nora from Queens for a second season. The news was revealed at Comedy Central’s TCA presentation. “We are in awe of Awkwafina’s creative genius on every level and we could not be more excited to […]