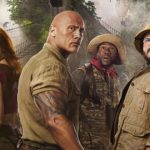 Red Stewart chats with Henry Jackman about Jumanji: The Next Level… Henry Jackman is an English composer who has been working in the film, television, and video game industries since the early-2000s. He is best known for his compositions for projects like Captain America: The Winter Soldier, Captain Phillips, and Ralph Breaks the Internet. His latest work was […]

A Hologram For The King, directed by Tom Tykwer, is due for release on both Blu-ray and DVD come the 19th September 2016 from Icon Film Distribution.  Based on the novel by Dave Eggers, Tom Hanks plays Alan Clay, a man who has lost everything now finding himself desperate and directionless within a strange and foreign land, searching for […]

As 2014 draws to a close, Excipio has posted the list of the 20 most pirated movies of the year, with Martin Scorsese’s The Wolf of Wall Street narrowly edging out Disney’s blockbuster animation Frozen with more than 30 million illegal downloads over the past twelve months. Via Variety, here’s a list of the top […]