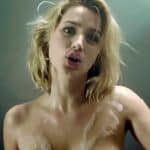 Knock Knock, 2015. Directed by Eli Roth. Starring Keanu Reeves, Lorenza Izzo, and Ana de Armas. SYNOPSIS: When a devoted husband and father is left home alone for the weekend, two stranded young women unexpectedly knock on his door for help. What starts out as a kind gesture results in a dangerous seduction and a […]

A new trailer has been released for Eli Roth’s horror/thriller Knock Knock, which you can view below as well as a clip from the film. Be warned though, the clip is definitely NSFW!! SEE ALSO: Two new posters for Eli Roth’s Knock Knock released When a devoted husband and father is left home alone for […]

Last week we saw two new posters for Eli Roth’s upcoming horror Knock Knock starring Keanu Reeves, Lorenza Izzo and Ana de Armas [see here], and now a new trailer has arrived online ahead of its U.S. theatrical release. Check it out here… When a devoted husband and father is left home alone for the […]

UK box office top ten and analysis for the weekend of Friday 3rd to Sunday 5th July 2015… Universal’s animated Despicable Me spinoff Minions held on to first place at the UK box office in its second weekend, comfortably fending off competition from new arrivals Terminator Genisys and Magic Mike XXL to top the chart […]

UK box office top ten and analysis for the weekend of Friday 26th June to Sunday 28th June 2015…   Universal Pictures continued its stellar box office run this past weekend with the release of the Despicable Me spinoff Minions, which dethroned Jurassic World at the top of the UK chart with a solid opening […]

Lionsgate has released a second trailer for director Eli Roth’s latest thriller Knock Knock which stars Keanu Reeves as a happily married man whose life is turned upside down when two attractive women randomly knock at his door. You can check it out below after the official synopsis… Evan Webber (Keanu Reeves) is living the […]

Following its debut at this year’s Sundance Film Festival, and its first trailer over the weekend [watch it here], Eli Roth’s latest, Knock Knock, has been picked up for distribution, Deadline has revealed. Lionsgate, the studio behind The Hunger Games franchise, has closed a deal over the last couple of days to distribute the film, […]

Evan Webber (Keanu Reeves) seems to have it all in life, but that isn’t stopping him from banging two insanely attractive females that randomly show up at his door. Probably not a wise decision considering afterwards the teaser shifts to a horror vibe. Ahead of its premiere at Sundance,  here is the first trailer for […]

Scott Davis on films to look out for at Sundance 2015… It’s the most wonderful time of the year, when many of Hollywood’s big hitters gather together to be awarded a variety of different prices on the Awards circuit, culminating with the 87th Academy Awards on February 22nd. But on Thursday weekend in west USA […]