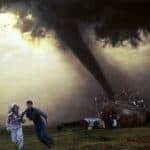 Anghus Houvouras is suffering from Dwayne Johnson franchise fatigue… We spend so much time analyzing franchises. That’s mainly because they make up such a high percentage of blockbuster cinema. If you look at the top 10 films of 2017 globally, only two films don’t fall under the franchise tag: The Boss Baby, an animated family film […]

Central Intelligence, starring Dwayne Johnson and Kevin Hart, is a hilarious, action packed comedy that proves that heroes come in all shapes and sizes and it’s due to land on both Blu-ray and DVD come the 31st October 2016.  To celebrate this upcoming release we’ve listed five of the Dwayne ‘The Rock’ Johnson’s best movie […]

Dwayne Johnson is set to reunite with director Brad Peyton for a sequel to last year’s disaster movie San Andreas, with The Hollywood Reporter revealing that Neil Widener and Gavin James have signed on to pen the script. Johnson is expected to be joined in the reunion by co-stars Carla Gugino, Alexandra Daddario and Paul […]

Last we heard, the video game adaptation Rampage was being written by Ryan Engle (Non-Stop), but its star Dwayne Johnson has announced via Instagram that Carlton Cuse & Ryan Condal (San Andreas, Colony) have joined the project for a re-write. Brad Peyton (San Andreas) is set to direct. “We have a shot to raise the bar […]

Having topped the international box office back in 2013, former WWE star Dwayne Johnson has now repeated the feat for 2015, with last year’s hits San Andreas and Fast & Furious 7 generating $1.488 billion and earning The Rock the title of Top International Box Office Star. “Only way to start this post is with […]

Warner Bros. Home Entertainment has announced the official details for the Blu-ray release of the action blockbuster San Andreas, which is set to arrive on October 20th. The film stars Dwayne “The Rock” Johnson, Carla Gugino, Alexandra Daddario, Paul Giamatti, Colton Haynes, and Kylie Minogue and has made almost $460 million worldwide since its release. […]

UK box office top ten and analysis for the weekend of Friday 26th June to Sunday 28th June 2015…   Universal Pictures continued its stellar box office run this past weekend with the release of the Despicable Me spinoff Minions, which dethroned Jurassic World at the top of the UK chart with a solid opening […]