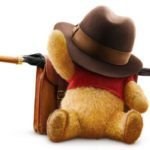 After the reveal of the film’s poster yesterday, Disney has released the trailer for Christopher Robin, a live-action Winnie the Pooh film. Directed by Marc Forster (All I See Is You), the film follows Ewan McGregor (T2 Trainspotting) as an adult Christopher Robin who has the help of Winnie and the rest of his old childhood friends […]