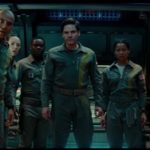 UPDATE: The new film – titled The Cloverfield Paradox – is now confirmed as arriving on Netflix tonight, and we have a trailer below… As everyone waits for the million dollar ads or Justin Timberlake half-time show, Deadline are reporting that Netflix are going to steal a march on all of the sporting razzmatazz by […]

The frequently delayed Cloverfield sequel God Particle looks like it might be the latest film on the Paramount slate to head across to Netflix. Paramount was due to release God Particle on April 20th, but it now looks as if the release date will shift again, particularly if the Netflix deal does go ahead. SEE […]

There’s been little info on the third Cloverfield film, formerly known as God Particle, for several months now, but it seems we have a new release date for the film. Comingsoon has confirmed with Paramount that the film has moved from its February 2nd, 2018 date to April 20th, 2018. The film, which was picked up by […]

It looks like we’re going to have to wait a little longer for the next chapter of the Cloverfield universe, with Paramount Pictures announcing that it has pushed back the release of the previously titled God Particle from October 27th to February 2nd 2018. Produced by J.J. Abrams’ Bad Robot and directed by Julius Onah (The […]

Much like The Cellar, which eventually became 10 Cloverfield Lane, the upcoming sci-fi God Particle is set to fall under the Cloverfield banner, a Twilight Zone-esque series of movies taking place within the Cloverfield universe. And, speaking to Collider, screenwriter Oren Uziel has revealed how his original script came to be a part of the ‘Cloververse’. […]

A few weeks ago, it was revealed that the next entry in the Cloverfield franchise would likely be Julius Onah’s God Particle, which was slated for release on February 24th, 2017. Now, according to Exhibitor Relations, Paramount Pictures has removed God Particle from their schedule and replaced it with an untitled Cloverfield movie set to drop […]

Earlier this year Paramount and J.J. Abrams’ Bad Robot Productions dropped a major surprise when it was announced that Dan Trachtenberg’s Valencia was actually called 10 Cloverfield Lane, and now it seems we may have another Cloverfield movie in the pipeline. According to The Wrap, director Julis Onah (The Girl Is in Trouble) upcoming sci-fi God Particle […]

Currently starring in Marvel’s Captain America: Civil War, actor Daniel Bruhl is set to join the cast of the mysterious sci-fi film God Particle from J.J. Abrams’ Bad Robot Productions, The Hollywood Reporter has revealed. Bruhl is latest actor to join the film after The Night Manager star Elizabeth Debicki was added to the ensemble last week, and […]