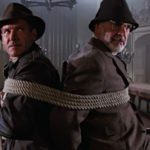 Sean Connery has been in retirement since 2003’s The League of Extraordinary Gentlemen, but it seems he did briefly consider coming out of retirement to reprise the role of Professor Henry Jones in Indiana Jones and the Kingdom of the Crystal Skull. However, he ultimately passed on the opportunity – not because the movie was […]

Tony Black on Indiana Jones and the future of the franchise… Ask almost anyone what they thought of Indiana Jones and the Kingdom of the Crystal Skull, the 2008 long-gestated sequel known forever and a day simply as ‘Indy IV’, and you’ll probably get much the same answer. “Awful!” “Rotten!” “Should never have made it!” […]

Last month, Disney announced that director Steven Spielberg and star Harrison Ford will be reuniting for a fifth instalment in the Indiana Jones franchise, which is being penned by David Koepp and is slated to hit the big screen in 2019. Details on the project are scarce, but producer Frank Marshall has offered a couple […]

Anghus Houvouras on whether Star Wars: The Force Awakens is the new Indiana Jones and the Kingdom of the Crystal Skull… Fandom is forgiving. History has proven this again and again. A cultural phenomenon like Star Wars is an interesting experience because fans are forgiving to a fault. Kevin Smith once called The Phantom Menace […]