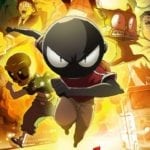 Ahead of its UK release next month, Manga Entertainment has revealed a poster and trailer for MFKZ, the animated adaptation of the hit French comic book Mutafukaz, along with the announcement of the English voice cast which includes Michael Chiklis as Crocodile, Giancarlo Esposito as Mr. K, Jorge Gutierrez as El Tigre, Dascha Polanco as Luna, RZA […]

Coinciding with its premiere at the Annecy International Animation Film Festival, Studio4°C has released a new trailer for MUTAFUKAZ, the animated adaptation of the hit French comic book; check it out here… MUTAFUKAZ tells the story of Angelino, one of the thousand deadbeats living in Dark Meat City. However, after an unremarkable scooter accident, caused […]

Villordsutch interviews Run and they talk all things Mutafukaz… Mutafukaz (Vol.1) was released back in October 2015 and it is quite brilliant (you can catch our review of it here).  Not your average comic and certainly not following the normal rules of how a comic should flow, this piece of art by creator, artist and writer Run […]

A first teaser trailer has arrived online for MUTAFUKAZ, the upcoming animated adaptation of the critically acclaimed French comic book series from illustrator Run; check it out here… SEE ALSO: Read our review of MUTAFUKAZ MUTAFUKAZ tells the story of Angelino, one of the thousand deadbeats living in Dark Meat City. However, after an unremarkable […]

Villordsutch reviews MUTAFUKAZ… Every once in a while a comic will arrive through your letterbox/on the comic book store shelf/on your eReader (delete were appropriate) and it will be like nothing you have read before – and I’m not talking a slightly different superhero by their skin colour/gender/sexual preference (again delete were appropriate).  MUTAFUKAZ is a totally different comic book […]

It’s been announced today that the rather excellent comic book series MUTAFUKAZ is coming to Titan Comics. Ankama announced that the publishing rights in the US, UK and Canada (and other English-speaking countries) of its hit series have been acquired by Titan. MUTAFUKAZ is one of the most famous comics in France. It is the story […]