J.J. Abrams’ Star Trek Into Darkness found itself coming in for some criticism upon its release back in 2013 with regards to a scene featuring British actress Alice Eve, whose Dr. Carol Marcus is glimpsed briefly in her underwear by Chris Pine’s Captain James T. Kirk whilst changing our of her Starfleet uniform. The scene […] 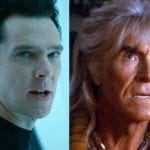 While Star Trek has its fair share of memorable villains, there’s one who truly stands out above the rest of the pack: Khan Noonien Singh, the genetically engineered 20th century warlord played by Ricardo Montalban in The Original Series episode ‘Space Seed’ and the 1982 feature film Star Trek II: The Wrath of Khan. Having […]

George Chrysostomou on nostalgia… Upon reading Anghus Houvouras’s piece on why everyone is hating on Ready Player One, a key theme of his argument really hit home – it struck me that there really ise a lot of nostalgia in the current crop of films and TV shows. Now, I know that this has always been present. Every […]

To mark composer Michael Giacchino’s triumphant return with Star Trek Beyond, Sean Wilson explores the extraordinarily rich legacy of music from the Star Trek movies… From being initially written off on the basis of the underwhelming trailers to its emergence as a funny, fast-paced and fan-pleasing summer blockbuster, Star Trek Beyond has according to most […]

Tony Black on the legal dispute over Star Trek: Axanar… Fan films have existed in the Star Trek universe almost as long as the licensed ones. Just look at Star Trek: New Voyages which frequently includes major stars from Voyager or as far back as The Original Series, frequently playing the roles they are beloved […]

Tony Black discusses Star Trek Beyond, and whether anyone really cares… If you took a straw poll of the general population, how many of them would know there was a new Star Trek movie dropping this summer? The chances are not nearly as many as there should be. Star Trek Beyond, the third movie of […]

Tony Black on the possibilities for Bryan Fuller’s new Star Trek TV series… Quietly stealing the thunder of Justin Lin’s upcoming Star Trek Beyond, it’s the freshly announced rebirth of Star Trek on the small screen which has triggered a wave of excitement inside and outside of Star Trek fandom since the news dropped in November […]

With the first official 4K Blu-ray titles now available to purchase in the US (the first UK titles are due on April 18th), Paramount Pictures have announced their first two 4K releases will be J.J. Abrams’ two Star Trek films. Coinciding with the 50th anniversary of Star Trek, both Star Trek and Star Trek Into […]

Last month, J.J. Abrams admitted that he felt there were some “fundamental story problems” with Star Trek Into Darkness, with screenwriter Damon Lindelof subsequently stating that he felt it was a mistake to keep Khan’s identity a secret. Now, with Abrams’ latest film Star Wars: The Force Awakens dominating multiplexes worldwide, the director has once […]

In the run up to the release of Star Trek Into Darkness, director J.J. Abrams and everyone else involved with the film went to painstaking lengths to keep the identity of Benedict Cumberbatch’s Khan Noonien Singh a secret – which would have been fine, had everyone not guessed the villain from the moment that the […]