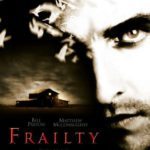 Frailty, 2001. Directed by Bill Paxton. Starring Bill Paxton, Matthew McConaughey, Powers Boothe, Matt O’Leary, and Jeremy Sumpter. SYNOPSIS: A young man arrives at the Dallas offices of the FBI claiming to have vital information regarding the elusive “God’s Hand” killer who has been terrorising the local area. Speaking with the agent in charge of […]