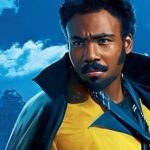 After returning to the galaxy far, far away in Star Wars: The Rise of Skywalker and seeing a younger version in Solo: A Star Wars Story, Lando Calrissian is finally getting his own story. During the jam-packed Disney Investor Day event, Kathleen Kennedy confirmed that the galaxy’s favourite scoundrel will get his own event series […]

Marvel Comics releases Star Wars: Lando – Double Or Nothing #2 this coming Wednesday, and you can take a look at a preview of the issue here… Lando Calrissian isn’t one to stick his neck out…unless there’s credits to be had for it. So, when he finds himself fighting for oppressed workers in a droid junkyard, […] Yesterday we got our first look at a selection of tie-in books set to accompany the release of Disney and Lucasfilm’s Solo: A Star Wars Story, and tucked away among those was a new Star Wars: Lando comic book from Marvel Comics, which we now have a few more details on. EW reports that the […]

In this week’s edition of The Week in Star Wars, we’ve got thematic details of The Force Awakens, a shocking poll number, a returning character, playthrough of Star Wars: Battlefront and more… Kicking things off with Star Wars: The Force Awakens and Kathleen Kennedy has been talking about the movie’s themes and how the Skywalker family play […]

In this week’s edition of The Week in Star Wars, new information about the First Order Stormtroopers revealed, plenty of LEGO Star Wars bits and pieces and the secret history of Obi Wan Kenobi… Kicking things off with only a couple of bits of The Force Awakens news (which is bound to explode this coming week […]

Marvel’s latest Star Wars limited series launches this coming Wednesday as the smooth-talking scoundrel Lando Calrissian heads up his own title Star Wars: Lando, and you can check out a preview of the first issue here… Before there was Cloud City, before he joined the Rebellion – there was just Lando. Trying to make his […]

Marvel Comics has released its Star Wars solicitations for September, giving us a look at the covers to Star Wars #10, Star Wars: Darth Vader #11, Star Wars: Kanan #6, Star Wars: Lando #5 and Journey to Star Wars: The Force Awakens – Shattered Empire #1, the latter of which officially bridges the gap between […]

Marvel has released the cover artwork for its July slate of Star Wars comics, which features Star Wars #7 and #8, Darth Vader #8, Lando #1 and #2 and Kanan: The Last Padawan #4. Busy month for Star Wars fans! Check them out here… Star Wars #7 – A special one-off tale of Ben Kenobi! […]